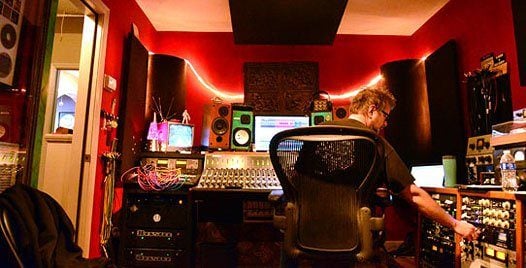 So here’s how this process works.

Mitch The Producer and I spent two days in the studio doing pre-production. That means different things to different people. For us it meant me playing every song for Mitch, hearing his critique, going through the A&R guy’s list of things that should be changed (and things that shouldn’t be), trying out a hundred different chord choices and arrangement ideas and tweaking some lyrics too. Pre-production basically moved every song from draft to final.

Along the way Mitch programmed some drum loops and I recorded rough guitar or piano (depending upon the song) and rough vocal. The loops, and my playing and vocals only serve as a guide for the rest of recording. They’re the “click” the players record to. I’ll record keeper piano parts on an upright acoustic piano and replay my guitar parts later. Then yesterday and today we moved into the tracking phase of the record. Tony Lucido is on bass, Jake Goss on drums, and Steve Mason (of Jars of Clay) is on guitar parts too hard for me to play…and there are plenty. These three guys are recording the skeleton of the songs – basic bass, drums and core guitar part for each. They start by gathering in the control room to “chart” each song while listening to the loop and rough vocal versions Mitch The Producer and I made in pre-production. Being a composition major I’m always curious to see how each player interprets the song theoretically and charts it out. One guy here’s a song in 2/4 time and another in 4/4, for instance. Or Tony’s chart looks like theory homework. But Jake’s is just a few notes and some doodles in the upper corner. A stick figure and a tornado maybe? We’re tracking nine songs in two days. (One song will just be piano and strings so it gets skipped in the tracking process.) By the end of tracking – that’s 5:30 PM today – the songs will sound like songs. All they’ll need is skin and final vocals. And they’ll get that next week.

I don’t know what to call that part of the process. “Recording” sounds too mundane. Smiling for eight hours every day? Yea, it’s more like that.

This is my favorite part of the process – the puppets become real live boys. I sometimes cry during this process (only sorta kidding) – so amazing when something I only partly hear in my head comes fully alive in the hands of greater musicians. Feels supernatural. Every time. Thanks for encouraging and praying us through this process. You’re with us today. “Thank you” doesn’t seem like enough for that.

Speaking of “enough.” No one’s heard the song by that title yet. How about a peek? Here’s Steve and Tony charting it.

31 comments on “The Process From Sputnik Sound”