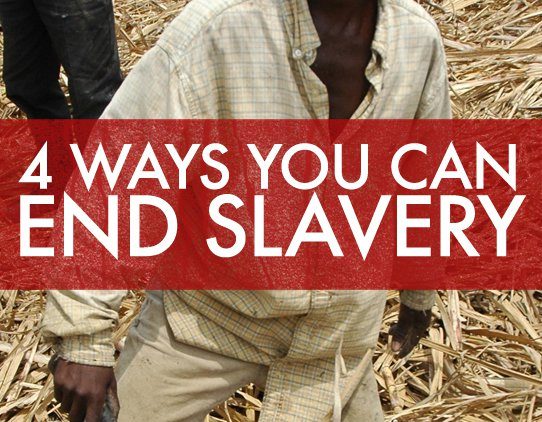 What can you and I do to end slavery?

What I’ve Seen Of Slavery

INDIA 2009. We walked through the open-air brothel in Kolkata as a local pastor explained how the girls in the doorways got from their homes in Bangladesh and Pakistan to slavery in India. Poverty, he said, made them desperate for work anywhere they could get it. They were young – late teens – when they saw ads for job openings in India: housekeeping and hotel hospitality mostly. Sometimes moms and dads sent them away to work, in hopes that they could send money back home.

But the job openings were fake; lures to get women to pay for transport and documentation necessary to begin a new life in India. And once in debt to the “employment company”, the women were forced to pay the debt back – their new life in an Indian brothel usually ending before their twenty-first birthday. DOMINICAN REPUBLIC 2008. The men in the field pumped their machetes in the air and yelled in Creole, not Spanish. They were angry that our photographer was snapping their picture without paying them first. But their anger at Americans was older than that afternoon.

I heard their stories, from their own lips that day, and from their children too. They harvested sugar for a U.S. company based in Florida – working 18+ hour shifts to pay off a debt they’ll never be free of. They owe the company for transport from Haiti to the Dominican Republic, for citizenship papers they’ve never received, for their eight foot by ten foot house on the plantation, for food bought at outrageous markups from the company store…their debt grows as generation after generation harvests sugar for Americans. 4 Things You Can Do To End Slavery

Today thousands of people are putting a red X on their hand, their clothes, their cars as a symbol of their outrage against poverty. But we do this knowing that symbolism and awareness alone will not end slavery. Here are four things you can do today to end slavery around the world.

There is a well-documented link between physical poverty, length of education and slavery of all kinds. Poverty makes a child – any person – highly vulnerable to all forms of exploitation.

One way to prevent slavery then is to combat poverty by meeting a child’s basic needs for education, proper nutrition, and health care. This is called holistic child development and the highest rated child development organization based in the U.S. is Compassion International. Their methods are scientifically proven to work.

ACTION: For $38/month you can prevent slavery. Go here to give.

End It Movement estimates that there are 27 million men, women and children living as slaves today – “more than at any other time in history.” Of all the organizations pursuing justice – working to free those slaves and prosecute their captors – International Justice Mission has been around the longest (15 years), is the highest rated, most transparent and accountable. And they are effective.

ACTION: Make a one time gift of as little as $30 or become a monthly supporter to help IJM pursue justice. Go here to get started. A translator in the Dominican Republic told me that slavery will continue in that country until “we provoke companies to be fair.” Truth is that every time I buy clothes or produce from companies that do not treat workers fairly, I am rewarding bad behavior. If enough of us stop making slave owners richer they will be provoked to fairness.

Start by buying products that are certified fair trade or come from companies whose manufacturing practices have been independently verified as slave-free. I trust the ratings of free2work.org. Click the image below for their ratings of popular apparel companies. Or grab their app, scan a product’s barcode, and get the scoop on its manufacturer. (As a general rule, if something is very cheap for us, it likely came at great expense to someone else.)

ACTION: Buy second-hand. Use the free2work app to research products (or do a simple Google search) before buying new. Prayer doesn’t feel like substantive action does it? But if we believe the words of the apostle Paul, it certainly is.

If you can’t give to prevent injustice or pursue justice. If you’re not shopping today for fair trade shoes or avocados. You can still fight slavery by praying for the global staff of International Justice Mission and Compassion International, for those living in the slavery today, for those enslaving others with their purchasing decisions, for better enforcement of anti-slavery laws already on the books…and that today the thousands putting a red X on their hand will move beyond symbolism to substantive action.

ACTION: Could you close your laptop, turn off your phone, and spend the next ten minutes praying to end slavery?