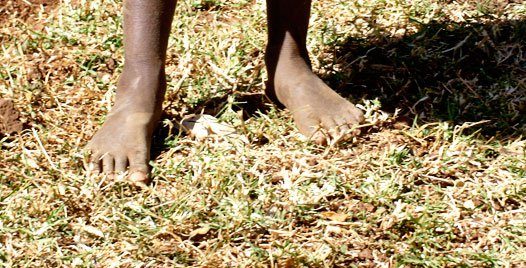 There’s a little girl from Ethiopia who goes everywhere with me.

She just stands there expressionless, her skin ashen, her hair falling out, her feet missing toe nails, her tongue swollen, her two fingers pointing into her mouth in a silent plea for food.

When I want. When I say “I need,” “I’m poor” or “I’m starving.” When I’m tempted to buy something for someone this Christmas who already has everything. She stands there. She always stands there.

She represents the almost 30,000 kids under the age of five who will die today from poverty.

Every night I put her picture on the big screen and tell her story. I ask people to care, to give. So far, on this Christmas tour, a smaller number than usual have. In five years of speaking for Compassion International I’ve never seen so few people willing to give.

“I’m sorry,” they’re telling her, “but I really need to see The Office, and the game on Monday night, and the latest news on Tiger Woods.”

“I’m sorry,” they’re saying, “but my son really needs an X-Box…and have you played Halo 3?”

“I’m sorry,” they’re saying, “but I want a Merry Christmas and you’re a downer.”

“I’m sorry but I already give to my church.”

“I’m sorry but my stocks are down.”

I don’t know, but I think it’s easier for them than for me. They only have to see her face for a few minutes. Then it’s intermission, then on with the show, then buy a CD, then back in the car, then back to the house and back to life. But for me? She follows me to the bus and when the lights go out in my bunk she’s still standing there and I wonder…

Is it me? Is my heart not in the right place? Am I communicating badly? Am I saying too much? Too little? Is it the economy? Are people unable to come up with $38 a month? Is it generational? The crowds on this tour are a little older than I’m used to. Does my parents’ generation just prefer to give to church instead of a “cause?” Are they skeptical? Can I do anything about that? What’s going on? What more could I have said? I’m trying. I really am trying.

I’m spending time alone this morning, praying, listening, asking God to forgive my arrogance – forgive me for thinking I can do His job and move and inspire people to sacrificial generosity. I’m asking God to make this little girl so real to the audience tonight that they say “yes” to her and “no” to the never-ending list of wants we all carry around with us. I’m asking Him to give me as much compassion for rich grown-ups as I have for poor children. I’m asking him for a miracle.

I’d appreciate your prayers. So would the little girl standing beside me.

73 comments on “She’s Always Standing There”