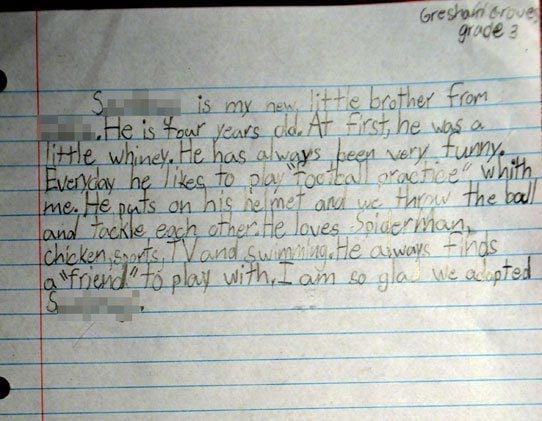 It’s become the most frequently asked question on the road, at church, on-line. Surpassing “How did you and Becky meet?” and “Is that your real hair color?” and “What’s Ann Voskamp like in real life?”

“How is the adoption going?” everyone asks.

And my mind gets jammed with too-long answers. And I filter out what our agency has asked us not to share with the general public for now. And after a few seconds I finally settle on the vague and probably unsatisfying “Good. It’s going well. Thank you for asking.”

S refuses to eat food from his country now. Should I mourn this as a loss of culture and a shift of his loyalty to ours? Or celebrate that grocery shopping just got a lot easier?

He asks questions he knows the answers to…constantly. Is he overly inquisitive? Attempting to forge a conversation and connection the only way he knows how? Or has a massive brain tumor taken out his short term memory?

He’s constantly told by total strangers that he’s cute and funny and he is. But is he entertaining to earn love, to make sure he is liked and will never be given up? Or is he the next Beiber or Barak – naturally charismatic?

I’m uncertain and conflicted so much of the time. I think he is too. And this will get better and better, we’re told, but normal is gone forever.

Beneath “Good. It’s going well.” is what one adoptive dad and friend of ours has described as a low hum. Persistent neediness. New skills required of us. New levels of attentiveness, patience, compassion, optimism. New questions have to be asked.

And, our friend says, this hum doesn’t go away. Ever. It gets better at times, he says, but it will always be there. It’s this constant feeling of unfamiliarity, a seismic shift in normal.

Yes, we’re good. S is good. It’s going well. But, no, life isn’t and never will be how it was before. The hum is here to stay. But so is block stacking, playing cricket, funny new words for bodily functions, that laugh like Ernie’s, long prayers before lights out every night, rolled r’s, dreams about chocolate and on and on. On top of the hum is so much good, so much joy-giving good, so much to love.

On a particularly exhausting defeating day it took an eight year-old’s homework assignment to remind me of that. I’m so glad we adopted S too.

18 comments on “How’s The Adoption Going?”