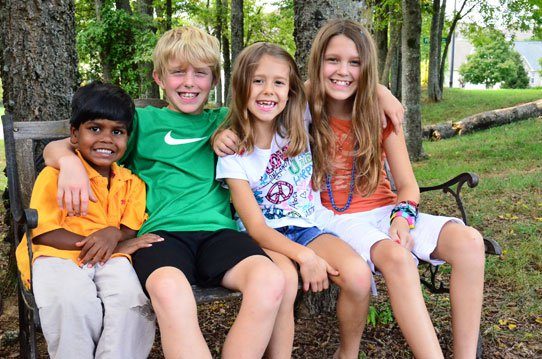 “Forever?” he asked. I tucked his Spiderman blanket around him and sat on the edge of his bed.

The next morning he headed off to school and I drove to the airport. And, as promised, I returned home again to play.

“I’m going on an airplane again tomorrow. I’ll be gone for only one day.”

The next morning he went to school and I went to the airport. And a day later I returned home again to play – just like I promised.

And eventually… “I always come back don’t I?” And he remembered and smiled and slept.

Though he’s been my son for more than a year now, Sambhaji still thinks like an orphan. So do I. Jesus told his followers in John 14 “I will not leave you orphaned.” He promised them the Spirit, a forever guarantee of everlasting connection to the Father.

The letters of the apostle Paul are filled with adoption language too. We are not orphans. We are sons and daughters of a Father we can trust.

But when the set time had fully come, God sent his Son, born of a woman, born under the law, 5 to redeem those under the law, that we might receive adoption to sonship.Because you are his sons, God sent the Spirit of his Son into our hearts, the Spirit who calls out, “Abba, Father.” -Galatians 4:4-6

For he chose us in him before the creation of the world to be holy and blameless in his sight. In love he predestined us for adoption to sonship through Jesus Christ, in accordance with his pleasure and will— to the praise of his glorious grace, which he has freely given us in the One he loves. -Ephesians 1:4-6 God promises that no one can separate me from him.

I give them eternal life, and they shall never perish; no one can snatch them out of my hand. -John 10:28

But some days – and they’re rarer the older I get – I feel as if God has left me, I wonder if He’s ever coming back. “Forever?”

Though I’m His son, I think like an orphan. All I know to do for Sambhaji is what God has done for me.

Trust is built on a pattern of promises kept. I trust God to keep me because He’s kept me.

Why? Because when I stop counting I start doubting. I say “but when will you” and God says “I already…” and “I promise to again.”

Counting is remembrance. And with remembering comes trust and joy and rest.

I’m home for a while before heading out on tour with Mark Shultz and Anita Renfroe. (Dates here.)I’m working from home and cutting off early when Sambhaji gets home from school every day. So we can wrestle and read together, explore the construction site down the road and eat popsicles.