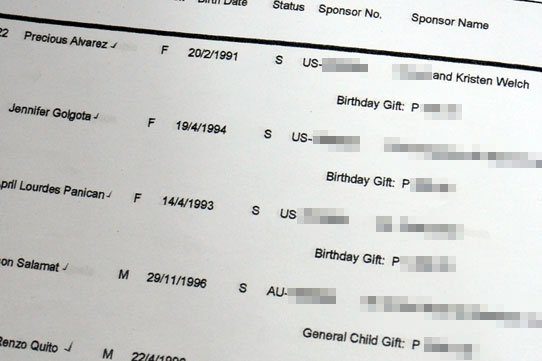 Ladies and gentlemen, kids of all ages, prepare to be amazed. Turns out I’m the Chris Angel of the Philippines…without the eyeliner and pectoral muscles.

One of our bloggers has asked some outstanding questions about how Compassion handles its finances. So I told this story.

On my first trip overseas, way back in 2005, I boarded a plane to El Salvador to see if Compassion could really be trusted. I suspected they were a scam. I just had to figure out what that scam was. So when I visited a Compassion child development center in San Salvador, I asked a worker there if I could look inside a file cabinet. I expected her to ask a superior for permission, or ask me why, or get angry even. But instead she opened it.

I pulled out a random folder. It contained every record for one sponsored child cared for there. The worker explained what I was looking at, patiently wading through medical charts and report cards and financials. I walked away convinced. My CPA wife and I were so convinced that we drastically changed the way our family lives so that we could help more children live.

This afternoon, at a child development center in the Philippines, after telling that story, I opened a file cabinet.

I pulled out a file randomly. It contained all the financial records for the center for a given month. I flipped to a random page. It was a list of children’s names – children whose sponsors had given extra money that month so that their sponsored child could receive a birthday present. This was money above and beyond their monthly sponsorship of $38. I picked a name randomly. The first one. “Precious.”

“Can you show me the receipt to prove how this birthday money was spent?” I asked the bookkeeper?

She turned the page. And lots more until we reached a receipt. “The child signed the receipt to verify that she had received this gift,” the bookkeeper explained. “And also,” she said, “a photo was taken of the child with the gifts purchased.”

Well, anyone can say they have proof like that right? “Show me,” I said.

She passed the book to a co-worker who clicked away on a nearby computer. “There is the picture,” she said, turning the screen toward me. And there she was – Precious, posing with her birthday gifts. Her sponsored child number on a placard at her feet. But here’s the magic. I asked the bookkeeper if I could photograph all this stuff and send it to Precious’ sponsor with a thank you note for her generosity. I thought knowing how carefully her gift had been handled might give the giver greater peace of mind…and keep the gifts coming to Precious every year!

The bookkeeper flipped to another page in the book. “Kristen Welch is her sponsor,” she said. I couldn’t believe it. This child development center is the largest in the world. More than 700 children are served by Compassion through this center. I picked one folder out of many. One page out of hundreds. One child out of dozens. Randomly. And that child happens to be sponsored by my friend, Kristen Welch, who traveled with me to Kenya to blog about Compassion in 2010.

So, Kristen, I think this magic trick was for you. And your family. Don’t ever doubt that your generosity is being stewarded well by the staff at child development center PH238. Here’s the proof!

And thank you. Thank you for choosing to sponsor Precious from thousands of children. Randomly? I don’t think so.

Need more proof that Compassion operates with the highest financial integrity before you sponsor a child? Check out this page listing some of the accolades and top ratings Compassion has been given from top non-profit watchdogs and the financial press.

And then, when you’re as convinced as I am today, please choose your child from the thousands waiting to be sponsored.

Thank you in advance for doing that.

100 comments on “A Magic Trick For Kristen”