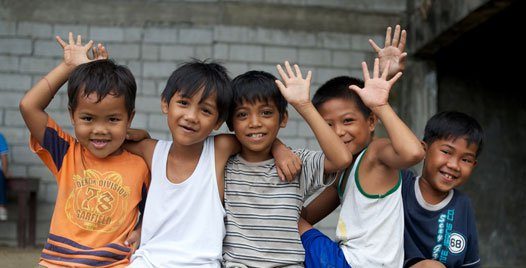 We gathered around a dinner table tonight to reflect, laugh, cry – before boarding a plane bound for America in the morning. And Patricia asked the bloggers what their high and low points have been this week in the Philippines.

And mine were easy to recall. They both happened nine and a half hours ago. Give or take a few minutes.

I made a fool of myself playing games with the kids of Compassion child development center PH210. My team won, by the way. I learned new names and new words. Or tried too. And the kids cackled when I got them wrong. Every child in this project poured energy into my sleepy frame. Joy. The unspeakable kind. The kind that gets stuck behind the voice box and comes pouring out through eyes and holding hands and running and giggles. It flowed from every child into me. So tired. Resurrection joy. There was Jericho. He didn’t say his name. He chanted it. What’s your name? Jer-i-cho! We began our day at the end of our collective rope. Exhausted. Some discouraged. But just a few hours later there I was scanning the churchyard watching blogger after blogger enthralled with kid life, sweating, smiling, blowing balloons, throwing frisbees, sitting and talking with new friends. Revived. Happy. Full.

And I was too. To the brim. At that moment that child development center may have been the happiest place on earth. And I was honored, amazed to just be there.

Then I saw them. Then two. Then a whole crowd. On the other side of the fence. I don’t know if it was just plain old corrupted me or some dark power creeping up unseen, but something pulled the drain plug and out ran all my new happiness. In an instant it was gone. And in the empty echoed a voice – a convincing voice. My voice?

You’ll never save them all.

All those miles traveled. Words spoken from stages. Pleas written in pixels. Thousands sponsored over the last six years. Insignificant.

You’ll never save them all. All I could do was pray. That one word prayer that comes from our lips without thinking – just before the other guy’s car collides with ours, just after the doctor reads the test results, in foxholes. I felt like I was in a foxhole.

And my mind flooded with memories. With you.

The young woman who was promised a car on her sixteenth birthday but told her mother she’d rather give the money to Compassion and bum rides from friends instead.

A public school teacher who sees sponsoring children as a way to teach her fifth graders about life in other countries and generosity.

The college baseball team who decided to sponsor a little boy together.

A retired realtor in Michigan who buried her head in my chest and wept – sponsorship giving her the gift of new purpose after years of feeling used up.

The couple whose sponsorship of a child from Guatemala stirred in them such love for the children there that they adopted two.

My mother, who seems to sponsor a child every time she comes to one of my concerts – never having enough grandkids. She’s running out of room for pictures on her refrigerator.

I thought of these sponsors – of so many of you – and gave thanks. Filling again. Gratitude rippling. Hope rising.

Without you how many more faces would look through that fence at me? How many more hands would grip its wires?

We’ll never lift every child over the fence. Heartbreakingly true.

But what about one more?

31 comments on “The Other Side Of The Fence”