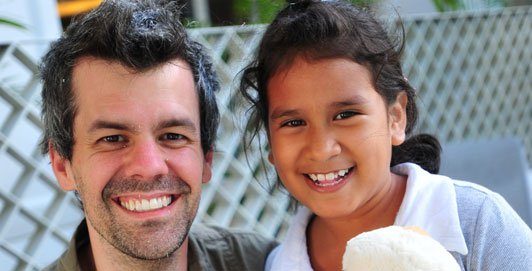 “Did you know that you are famous in America?” I asked.

She shook her head no.

“You are a writer?” she guessed through a translator.

“After I visited you four years ago I went back home and started traveling all over America and Canada, to churches and universities, singing and telling people all about the day we spent together.”

“No, I really did!” I said. “I told them how much fun we had together, how beautiful and smart and special you are. I told them all about your family. I showed them your picture.”

Yanci giggled and hid her face behind one hand.

“And then,” I explained, “I asked the people in the audience to sponsor a child. And a lot of people have. All because of you.”

“Sometimes people ask if there are any children as smart and artistic and funny and pretty as you that they can sponsor,” I said with a wink. “And I tell them there’s only one Yanci.”

“I told you. You are very famous.”

If you’ve been a to a concert of mine you’ve probably heard this story. Yanci changed the direction of my life in 2005. I was invited that year to go on a trip with Compassion International, to see if they really were all they claimed to be. Yanci and a translator met me at my hotel, we climbed in a bus and drove to a Compassion project and played for a couple hours. She laughed at me for butchering the Spanish language. So I retaliated with some vigorous tickling. I pushed her in a swing and spun her around like a top until she got sick and I had to share my Gatorade. She traced my hand in crayon and I traced hers. I walked her around a market with her hand in mine. We shared a rainbow popsicle and I carried her everywhere like she was my own. A translator told me there was a time when Yanci was hungry but “now she eats every day and her favorite food is chocolate cake.” She told me Yanci wanted to be a teacher and that she did well in school. Yanci sang me a song about Jesus.

Then, on the bus ride back to the hotel, Yanci rested her sweaty head on my chest and arm and fell asleep. There have been few moments in my life in which I’ve been so fully present. I remember looking down at her and knowing I would never be the same. I felt like I was at the top of that first big hill on a giant roller coaster waiting to drop: terrified but fully alive.

This is what I was made for, I thought. Not to make music, but to make life better for children like Yanci.

That’s Yanci’s famous story. It’s the story of one American who was rescued from his poverty by a little girl in El Salvador and given a purpose.

Today I got to say “gracias.” 61 comments on “Yanci Is Famous”