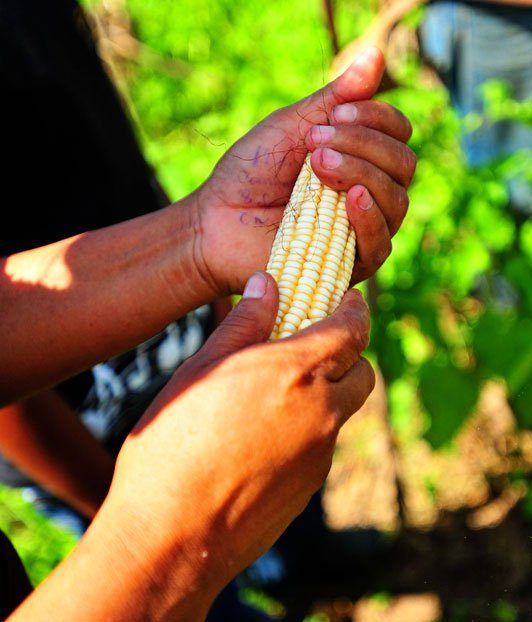 Warning: I’m not in El Salvador anymore but there’s plenty of El Salvador left in me itching to come out. Unlike the bloggers on our trip, I didn’t have the time to write much while we were in El Salvador. So, if you’re burned out on the subjects of poverty, kids, hope and hurricanes, you might want to stop reading my blog for a few days. I’ve got some stories to tell.

But, you probably don’t know about the very technical sounding Complimentary Intervention Fund – a fund you can give any amount to as often as you’d like. When there is a need that is outside those three well-known Compassion programs, money from the Complimentary Intervention Fund is used. Needs like water purification, disaster relief, major surgery, or electricity for a village. Or, as Guillermo told us, planting corn.

Guillermo is the country director for Compassion in El Salvador. He told us about a small village of fishermen who couldn’t feed their families or pay their bills. It’s hard for a child to learn about math or Jesus when he’s starving and it’s hard to let your child go to school when you need her to earn money. The fishermen, whose kids were in Compassion’s child sponsorship program, had a field and a desire to plant corn. So Compassion dipped into the Complimentary Intervention Fund and gave the fishermen $400 for seed and tools and worked out some kind of deal for paying it back without interest over time. They were enabled to help themselves, so that their children could continue going to school and continue to eat.

And when it came time to harvest, the expert farmers were amazed to discover that the fishermen’s stalks not only produced corn, but that many of their plants produced two or three ears each. This was seemingly impossible for this particular variety of corn planted so poorly and then gnawed on by a bunch of cows.

“It was a miracle,” Guillermo said. C.S. Lewis believed that miracles are God doing up close, small and in focus what He’s always doing so large that it goes unnoticed by us. They’re reminders of what God is like and what He’s doing when we aren’t looking. When Jesus turned a little bread into enough bread for five thousand people, for instance, He was doing up close and in focus what God does large and all over the world every day. From two animals he makes numerous offspring. From one star he explodes a galaxy. From one seed he feeds a family.

I’m not God. I can’t make food appear in my refrigerator or steer natural disasters away from my family. My life is truly a miracle. It’s a miracle I can give away to someone who needs one.

8 comments on “The Fishermen’s Field”