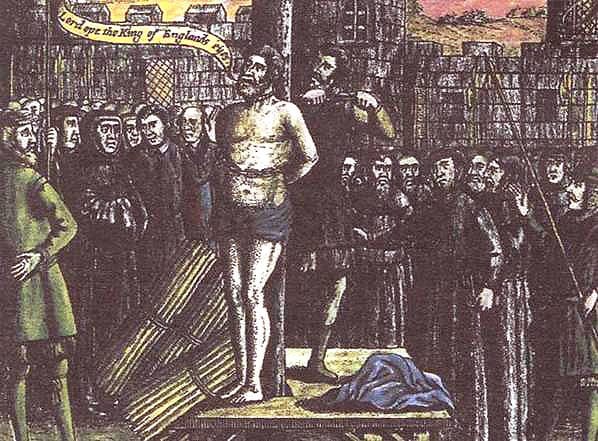 On October 6, 1536, William Tyndale was found guilty of heresy, tied to a stake, strangled to death, and his body burned.

Tyndale was a Catholic friar who translated the New Testament into English without permission or oversight from the Catholic Church. His translation contained many errors and some of those seem aimed at undermining some Catholic doctrines and practices of those days.

But one thing Tyndale got right: It is God alone who forgives sin and saves by grace through faith. This was heresy in the Catholic Church of Tyndale’s time. But this heresy is not why Tyndale was executed.

In 1530, Tyndale wrote a scathing treatise called The Practyce of Prelates which lambasted King Henry VIII’s attempts to have his marriage to Queen Catherine annulled by the Catholic Church. William Tyndale questioned the authenticity of any king’s faith if it is accompanied by unrepentant and habitual immorality. Tyndale’s treatise also criticized Church leaders throughout history for capitulating to immoral Christian emperors and kings in exchange for their own political influence and job security.

William Tyndale was strangled and burned for declaring that rulers who claim Christ as their king should act like Christ and ought to repent and fall on God’s grace when they inevitably fail to. This was a great heresy in Tyndale’s day.

Tyndale’s last words, spoken “at the stake with a fervent zeal, and a loud voice”, were “Lord! Open the King of England’s eyes.”