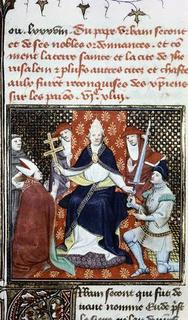 The main benefit to me in studying Just War has been gaining a better understanding of how we Christians have historically decided what is “right” and “wrong”.  What influences theologians and people like you and me as we make such weighty decisions?  What should influence us?

Today’s backtracks to look at what may have influenced Aquinas’ contribution to Just War thinking.

Like Augustine, fearful of losing the Catholic Church and his nation to warring parties within and without, Aquinas may also have been shaped by the wars of his day.  The crusades, now admitted by the Catholic church as a grave mistake and misrepresentation of God’s values on earth, had just ended – and ended badly – when Aquinas wrote about war.  The crusades were a series of wars waged by the Catholic Church (only Western European Christians at the time) and Rome.  They were carried out at the demand of Pope Gregory VII in an effort to claim cities considered holy by both Muslims and Christians.  Muslims had used force to prohibit Christians from making pilgrimages to these holy cities. The campaigns of the crusades (seven in all) would mean the death of a multitude of Muslims and Catholics – men, women and children – soldiers, civilians and clergy.

The Church leaders of his day seem to have unanimously accepted these wars as tragic but also holy and God pleasing.

Aquinas, born in 1225 AD, was twenty-three when the seventh and last crusade battle ended.  While I have been unable to find any writings by Aquinas explaining whether or not and to what extent the crusades affected his theology of war, it’s reasonable to assume isn’t it that such a lengthy military effort instigated by the Popes and Church he pledged his life to would have some affect on such matters? Reasonable in the same way we can assume the views of war held by us patriotic modern American Christians are somewhat influenced by our nation’s past and present military campaigns.