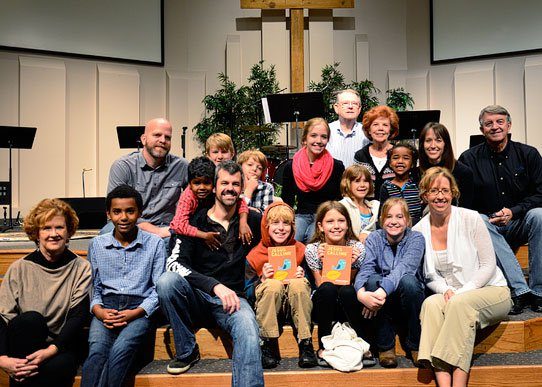 Gabriella is my theologian, dissecting everything she’s taught, digesting it into questions I often can’t answer.

“If God can forgive anybody for anything,” she once asked,”will he forgive Satan one day and let him into heaven with us?”

“Someone had to be punished for my sin because God made that rule,” she once reasoned. “Why didn’t he just change the rule?”

And a year ago, when we came to Romans 10:9, where Paul says that we must confess that Jesus is Lord (or king) of our whole life in order to be “saved”?

“I don’t want to be a Christian yet,” she said. “Sometimes I don’t want God to be in charge.”

Saturday, Gabriella waded into the baptismal waters honestly, with a will bent toward independence and a head full of unanswered questions. Gresham is, in a word, intense. He practices the piano intensely – sometimes banging his fists on the keys in frustration, but always starting over again where he left off. He studies intensely – running through his Latin vocabulary words over and over, his head bowed, muttering to himself, until he’s certain he’ll ace the test. He plays intensely – there’s no difference between the backyard and the red zone in a playoff game.

Gresham has wanted to be baptized for over a year, after seeing a friend emerge from the water to applause and cake. I put on the brakes though – he didn’t understand what a Christian was yet. Until one day when suddenly it all clicked for him.

Explaining repentance, I pretended to be king. He was an enemy soldier, fighting alongside his sisters, against me. I beat him in a sword fight, took his sword away, and gave him a choice: fight on my side or be my prisoner.

He got it – God was letting him live and asking him to switch teams and fight against the bad guy. Repentance – changing sides.

Saturday, Gresham went under the baptismal waters with the fullness of his intensity intact – the loyal soldier of a merciful and good King. …in the name of the Father, the Son and the Holy Spirit. Buried with Christ in baptism. Raised to live a new kind of life. In our own unique way.