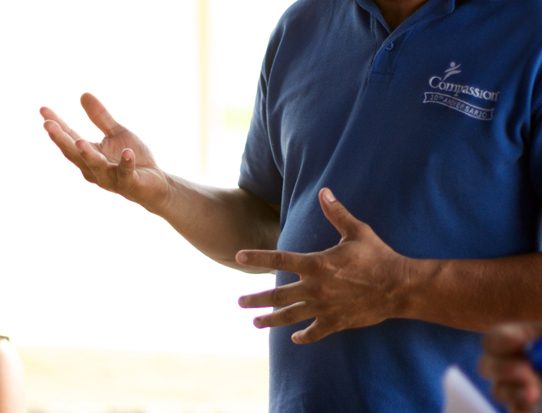 Outside Jerusalem’s walls, in the Valley of Hinnom, children were sacrificed to honor a false god. Hundreds of years later the valley, called Gehenna by Greek speakers, was still a place of death. A city dump, some say, Gehenna burned day and night. When describing Hell, Jesus pointed over Jerusalem’s walls toward Gehenna and made the comparison: The worm never dies. The flames never cease. Decay pollutes the air outside the city of God. (Mark 9:47-49) Many miles outside the city of Managua, Nicolausa bends at the waist, plodding through refuse in her green flip flops, rummaging with bare hands, searching for treasure in the trash. A million flies search alongside her.

A six pound bag of plastic fetches five cents, she says. Every truck load of refuse, if she works hard, will yield a bag. If five trucks come today she’ll walk the miles home with a quarter in her pocket.

“I’m here fighting for us, trying to survive working here,” she says.

Elvin, her grandson, is the other half of “us.” She shakes her head, shrugs and wipes a sheet of sweat from her forehead with the back of an equally sweaty wrist. It’s not uncommon for the poor to stop counting the years when the years are so littered with hardship. Grandmother squints beyond me to the back of our group. She’s searching for the answer among the Compassion workers who know Elvin well.

“He is eight,” a young woman in a Compassion shirt answers. The symbolism of Nicolausa looking to Compassion for answers can’t be shaken. As we leave the dump Nicolausa’s word’s stick with me like the smell of rotting acres clinging to my clothes. “I’m here fighting…working…to survive” But not working alone.

Down a bumpy dirt road from the dump, an oscillating fan stands still in a church office. I sit on the edge of the desk so I can look Pastor Dennis in the eyes. He tells the story of Compassion center NI155 in percussive Spanish…and with thick hands and easy laughter. Nine years ago, just before Elvin was born and left with grandmother, Pastor Dennis asked Compassion International to let his little church open a child development center. Compassion meets the physical and spiritual needs of 1.4 million children in twenty-six of the world’s poorest countries by working exclusively through local churches…but those churches have classrooms, more than one toilet, more than fifty members.

Dennis’ church had none of these things nine years ago. But Dennis and his fledgling congregation worked hard to meet Compassion’s requirements and, after adding toilets and rooms, eventually began enrolling children in their new center. A boy named Elvin was among the first.

“We named this center Hands of Compassion. Our logo is two hands. In one is the bible to symbolize the Word of God we give children. In the other hand is a cup to symbolize how we serve children.” Today Dennis’ church is 92 members strong. Twenty-one of them form the volunteer army of teachers, cooks and social workers tending to the 452 children served by Hands of Compassion – also known as Compassion Child Development Center NI155.

Pastor Dennis and his twenty-one volunteers bend over school books laid open on little desks, over a hot stove stirring chicken and rice, over a child running a fever. They bend down beside little ones digging for plastic beside grandmother and invite them away from the dump, into hope, to join Compassion’s program – to receive nutrition, healthcare, education and Jesus. They find treasures in the trash and fight for their survival.

And isn’t this what God has done? What God still does? He bends down for us. He reaches over the walls, across the miles that separate, into the decay and invites all us outsiders to join Him. To live.

“There is no greater satisfaction than helping people find change,” Pastor Dennis says before we hug goodbye. “When I see children change I just say ‘Wow!’ That’s God’s grace.”

Then he’s back to talking about hands again. “With Compassion we have become like this.” He fans out his fingers and then brings his hands together, clasping each other. “To do the work of God on earth together.”

Join Pastor Dennis in the work of God on earth. For $38 a month you can give one child healthcare, nutrition, education and Jesus. Sponsor a child in Nicaragua today. 36 comments on “Bending For Treasure In The Trash”