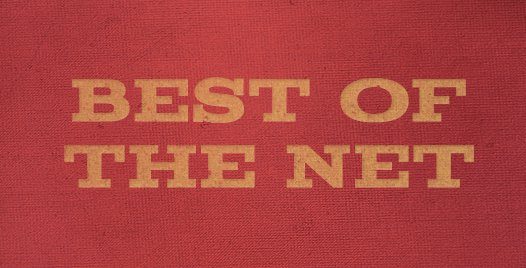 Here’s the best stuff I’ve run across this week on-line. Did I miss something great? Tell me about and link to it in the comments!

What Christians Need To Know About Mental Health

First up, What Christians Need To Know About Mental Health from Ann Voskamp. As someone who’s been pummeled by depression a few times and shamed by Christians for it too? Thank you, Ann, for speaking up…with such wisdom and grace…as always…about a subject every Christian needs to understand better.

The Christian Guide To Atheism

Alise is a writer I’ve long read intermittently and respected a great deal for her diplomacy and gentleness. Somehow I missed that her husband, once a seminarian, had “deconverted” from Christianity to atheism a few years ago.

Alise is now in a rare and perfect position to make peace, and facilitate discussion, between Atheists and Christians. She’s doing a wonderful job of this in a series of posts she calls The Christian Guide To Atheists, debunking such myths as “Atheists hate God” and “Atheists find life meaningless.” She publishes a post about a different myth every week.

I don’t know when I first became a skeptic. It must have been around age 4, when my mother found me arguing with another child at a birthday party: “But how do you know what the Bible says is true?” By age 11, my atheism was so widely known in my middle school that a Christian boy threatened to come to my house and “shoot all the atheists.” My Christian friends in high school avoided talking to me about religion because they anticipated that I would tear down their poorly constructed arguments. And I did.

As I set off in 2008 to begin my freshman year studying government at Harvard (whose motto is Veritas, “Truth”), I could never have expected the change that awaited me.

I’m half of a two-man team. Micah Watson acts as my road manager, booking agent, and plays/sings with me onstage. Micah has been a professional musician since he was nineteen…and, I can’t tell you how old he is now, but let’s just say nineteen was a long long time ago. Years of making music have made him a skilled writer and player.

He’s working on a batch of songs I’m encouraging him to put out as an album someday. Vulnerable songs about mistakes and grace. He’s tentatively called the album “Little Foxes”. Here’s a rough version of a song called “Home” from that collection – unmixed or mastered – as raw as the truth Micah sings.

I’ll beg for mercy
I’ll plead for grace
Let me be your servant, not your son

Why Your Teen Should Join The School Marching Band

Alphamom wrote a hilariously true article called Why Your Teen Should Join The School Marching Band and as a former alto sax player who spent hours sweating on the blacktop standing at “parade rest” in Texas? I’m telling you she couldn’t be more right.

You know who looks stupid in a marching band uniform? That awkward, pimply kid who snorts when he laughs. You know who else looks stupid in a marching band uniform? The drum-playing Ashton Kutcher lookalike all the girls are giggling over. Everyone. Stupid uniforms are the great unifier. The playing field is completely level (pun intended) for the band kids on the fraught topic of looks, and this can be a real relief for kids who are constantly worrying if they measure up.

Truth, my friends. That is truth.

Lastly, I couldn’t be a bigger fan of Beth Moore‘s right now – of her relentless communication of truth we need to hear…at just the right time. She’s somehow cuttingly direct and loving simultaneously. I know Beth only well enough to know that she would frown upon me giving her any credit for this skill. So I won’t. I thank God instead for these words God spoke to me and the rest of the internet this week through her in the wake of the tragedy that swallowed up Rick and Kay Warren recently.

But even now at the hardest moment of their lives the Warrens can teach something vital if we are willing to learn. Their heartbreak demonstrates what has always been true but has never been more profoundly overlooked: these who serve us publicly also suffer privately. They are not caricatures. They are not just personalities. They are people living on a painful planet with the rest of us.

18 comments on “Best Of The Net (Atheism, Marching Band, & Madness)”