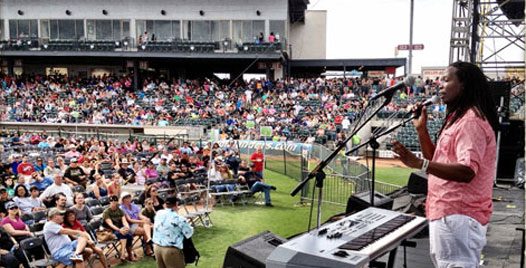 A man in the front row lowered his hotdog to his lap. A woman placed her index finger over her pursed lips to shhh her chatty teenagers. For ten minutes Jey had the attention of 4,000 people.

And all it took was one story.

“Texas,” I said, “welcome to the stage, all the way from Nairobi, my new friend Jey.”

Jey sauntered toward the microphone at center stage to a wave of applause. Then opened by thanking the Lone Star State for feeding him barbecue. We ate that barbecue together. Two hours earlier, at a picnic table backstage, I asked Jey to tell me his story: Born into the second largest slum in all of Africa. Fatherless. His mother sold drugs, sold alcohol, sold…well, she did all she could to feed Jey and his siblings.

Homeless at six, begging scraps and money on the streets. Stealing to survive at seven. Arrested at nine and put in prison with criminals as old as nineteen.

“Yes. In prison. We were always sick there,” Jey said. “I don’t remember anyone visiting us. No one cared for us when we were sick.”

I shook my head in disbelief, in protest, to shake out the mental image of my oldest boy separated from me by prison walls, alone, scared, abused…

I was supposed to…

But I’d forgotten about all that. A good story – a true story – has a way of making us forget about all doesn’t it?

I had to know how the hopeless boy eating food from the floor became the confident muscled man eating brisket with me at a baseball stadium in Texas.

“My grandmother told me about God when I was little. I thought prison would be my life…so I prayed. ‘God, if you exist, take me out of prison. Take me out of poverty.’”

After a few months, Jey was released from prison but life back home was the same as before. Still poverty. Still hopeless. So hopeless that his mother tried to take her life. Jey thought he would have to steal again and then…

“And then Compassion International took me in their program and gave me food and I could see a doctor and for me to speak to you now in English means I got to go to school.”

He laughed remembering how wonderful it all was.

“Compassion did that for me,” he said. “I did not have a sponsor at first but soon someone chose me.”

How do you fit this life, this miracle into ten minutes?

Jey did. With no help from me. Somehow Jey did. And on stage before thousands he told his story and made poverty and hope real. “Compassion and my sponsor gave me so much,” he told the crowd. “But three things I am most thankful for: Love, my education, and Jesus.”

As the crowd erupted into Amens and applause, Jey held a child sponsorship packet high in the air. “I was like this child,” he said .”It was me on a packet like this. And my sponsor chose me.”

A couple hundred hands raised all over the stadium. Child sponsorship packets were put in every one of them. Children were released from poverty. By a story.

Thousands of you are reading these words. I wish all of you could have been there to meet Jey – for the story and the barbecue. I wish you could meet Compassion’s children for yourself. It would all be so this-changes-everything real then. But there isn’t a picnic table big enough!

But how about this? I”ll bring the children to your house this week – one true story at a time. The best that my friends and I can anyway. You might want to put down your hotdog for this…

And if God moves you? Raise your hand. There are children waiting to be chosen.

We just arrived at out hotel in Lima, Peru. Off to bed. We’re up early in the morning to collect stories for retelling. Follow along on Instagram and Twitter and tune in tomorrow night for new posts from Peru. 20 comments on “Jey’s Story With A Side Of Barbecue”