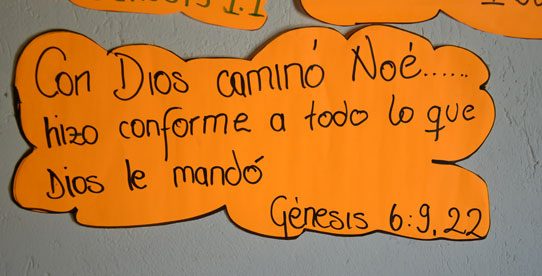 “Blessed are those who are persecuted for righteousness’ sake, for theirs is the kingdom of heaven.” Matthew 5:10 Manuel had been a Christian for only four years when he became Pastor Manuel. “It was the seventies,” he said. “Persecution was great.”

Rocks thrown through church windows. Church members harassed and beaten en route to services. Manuel’s life, and the lives of those he loved, were threatened. Then Compassion International moved into the community. Pastor Manuel’s church partnered with Compassion to launch EC431, a Compassion Child Development Center. “We started with only twelve children,” he said. “The community did not trust us.”

Today there are more than 350 – with rooms under construction to serve more. And peace has broken out.

“They trust us. Our church is full.” “Is that kind of persecution still common in Ecuador?” I asked Pablo, one of our translators, over the sound of rattling windows as we bumped down broken roads.

“Among the indigenous people it is, yes.” And I didn’t expect such barbarism still lingered. Not here. In a democracy? In my hemisphere? In a developing nation?

I leaned across the aisle and turned an ear.

Pablo was grinning. Becoming more and more animated with each sentence.

“They kept lighting matches and throwing them on him. Nothing happened. He kept preaching! And many know Jesus after that.” “And…a man I know,” Pablo continued, fired up like a big tent revival preacher now. “They dragged him to the street and told him to renounce his church. He refused. They beat him to the ground. Still he refused. They say they will kill him. Then his mother layed on him, to cover her son…They killed his mother.”

My face contorted uncontrollably from the grief I felt for this brother I’ve never known. But Pablo was smiling wide.

“And the church grew.”

Blessed are the persecuted for theirs is the kingdom of heaven – the dynamic reign and rule of God on earth in the present. In them. Through them.

Pablo and I stepped off the bus and across a playground where soccer balls flew, a swing set creaked, girls painted fingernails, three year-olds ate snack. I searched for a restroom and found instead a small empty-for-the-moment classroom and read the walls: Vocabulary words. Names of children. Memory verses.

Noah walked with God…and did all God commanded him to do. The road Faithfulness is narrow and paved with tears but never walked alone.

We walk with God. And God through us walks with the small, vulnerable, uneducated, hungry, sick and poor. And the Church grows.

Broken to be blessed and a blessing.

35 comments on “And The Church Grows”