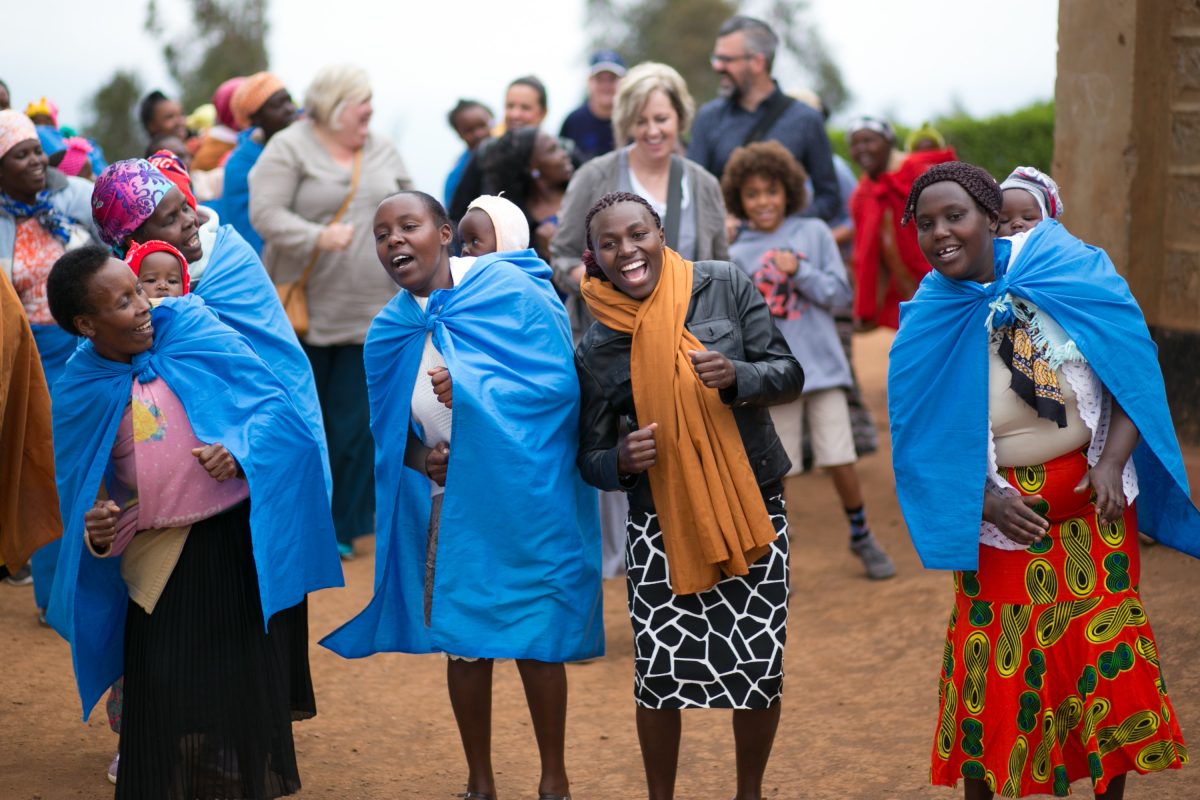 We stomp our feet against the red Kenyan clay, dancing arm-in-arm from the van to the church.

The women, with babies tied to their backs, sing in Swahili about how good the day is simply because God gave it and gave them visitors.

We bend low and the women sing their promise to always bow down to God and no one else.

A conga line forms and we dance it around the drive, kicking up dust, singing that God is the conductor of our train, steering us toward prosperity and not calamity.

We dance together into the Assembly of God Church and then dance and sing some more. The women bang their drums. The babies pull at the hems of mothers’ dresses. We sing to God who formed the stars and moon and all the universe, “yet he sees me.” 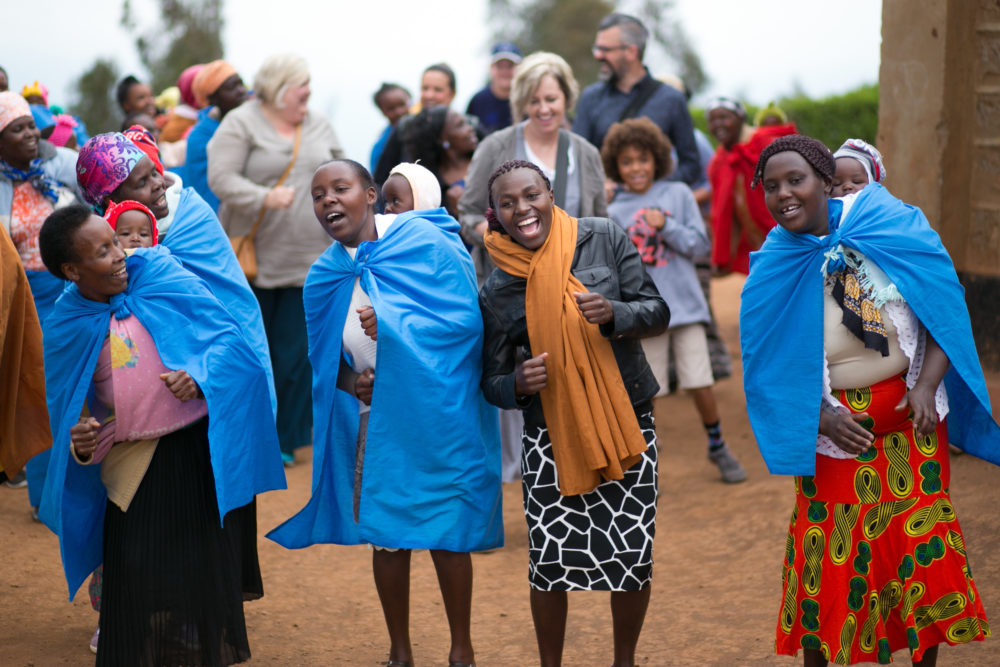 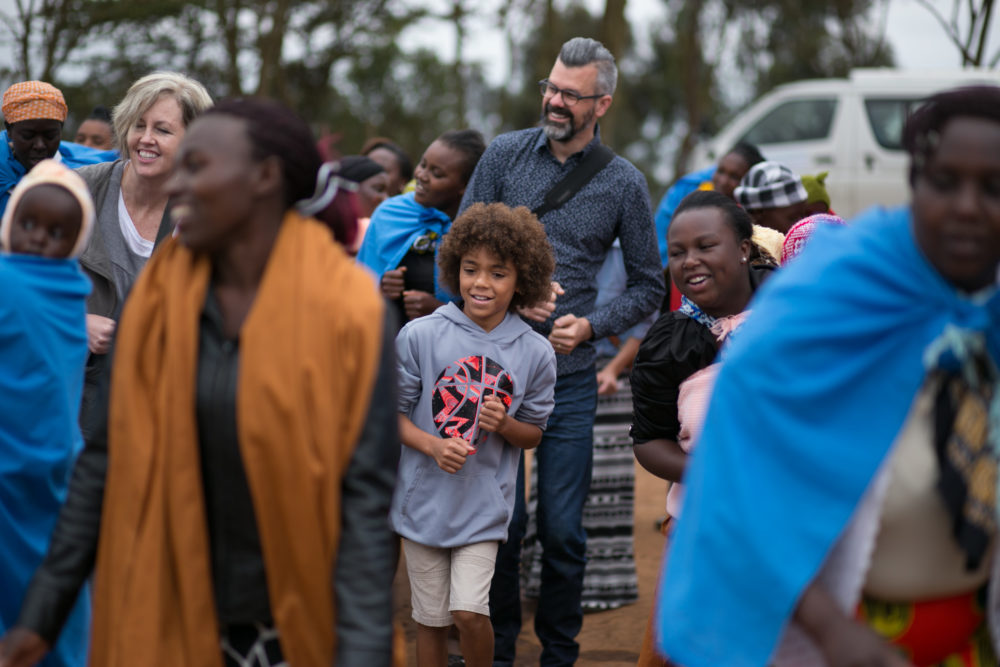 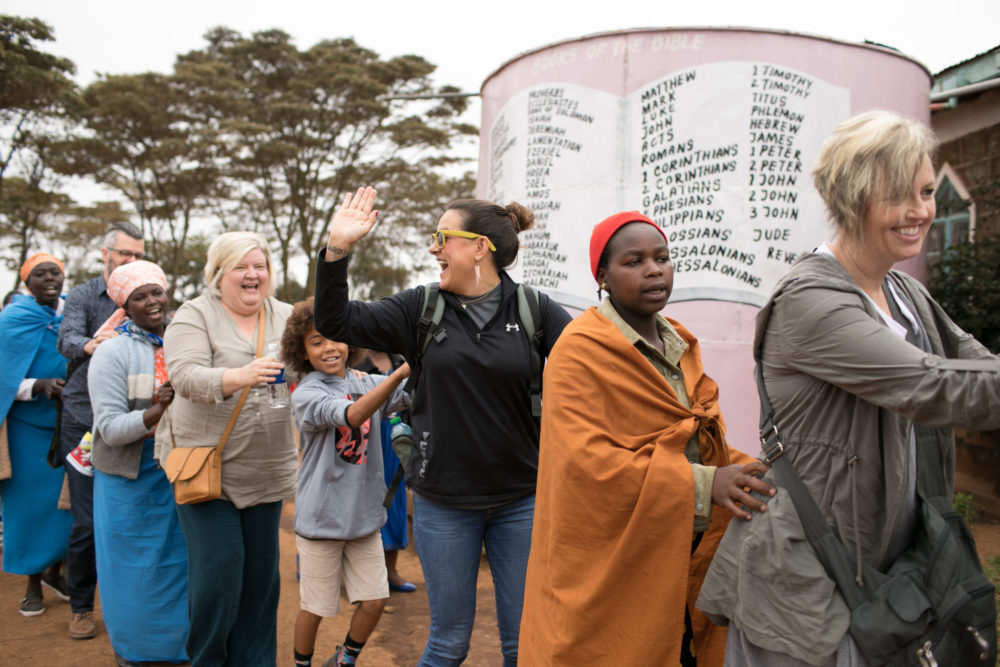 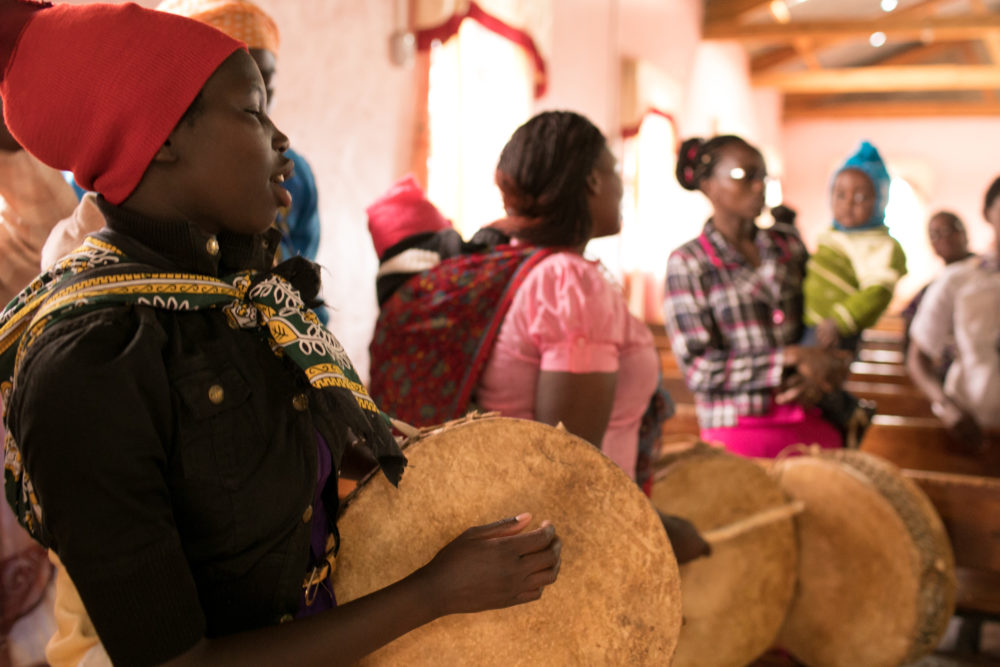 A mile down the road Boniface waits for me. He sweeps his home and puts on his best clothes and hears the music coming from over the hill.

“I have no one to trust but Jesus,” we sing. The drums pound. The mothers dance.

“God has formed the stars and moon and all the universe, yet he sees me.” 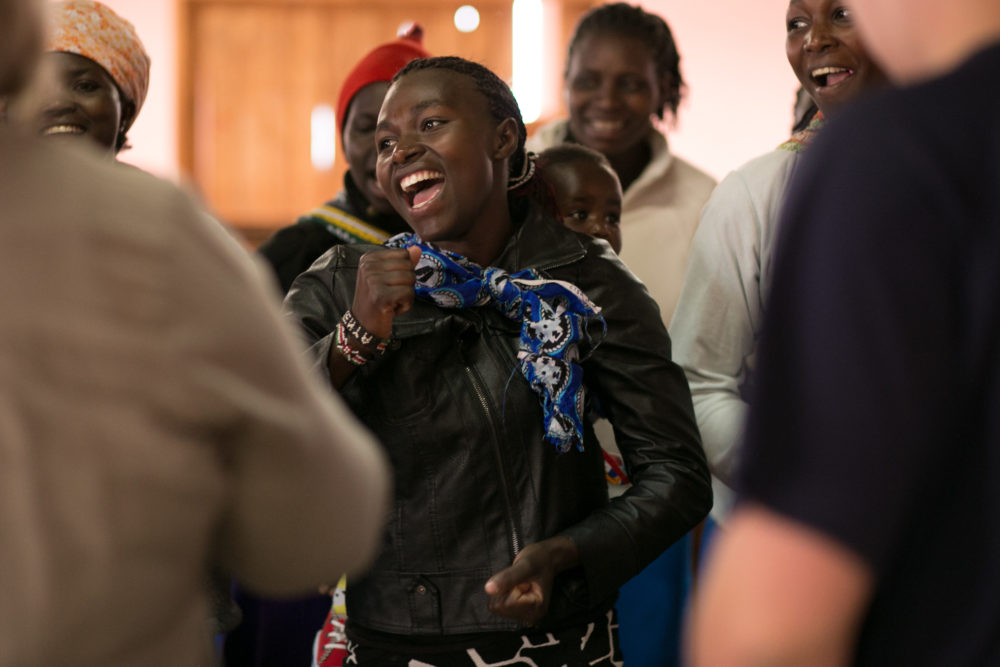 The walk to Boniface’s house is quiet and beautiful. Birds sing songs I’ve never heard before. A cool wind whispers through the cypress trees and out across a field of eucalyptus and potatoes. I follow it up the clay path to a mud house with its door open wide.

A large hand swallows mine before I can say a word. “Karibu” Henry says. Welcome.

His wife, Evelyn, smiles wide, bending under the weight of the grains and lentils and cookies we give. “Asante”

Boniface steps from the house last, taking my hand. He has his mother’s face and his father’s broad shoulders, but a seriousness all his own. He’s twenty and dressed fashionably not practically for the weather and dust of Kenya.

I’m an American from the suburbs who doesn’t speak their language and asks too many questions, but they treat me like a friend and laugh even when they don’t understand the joke. And slowly their story unfolds. 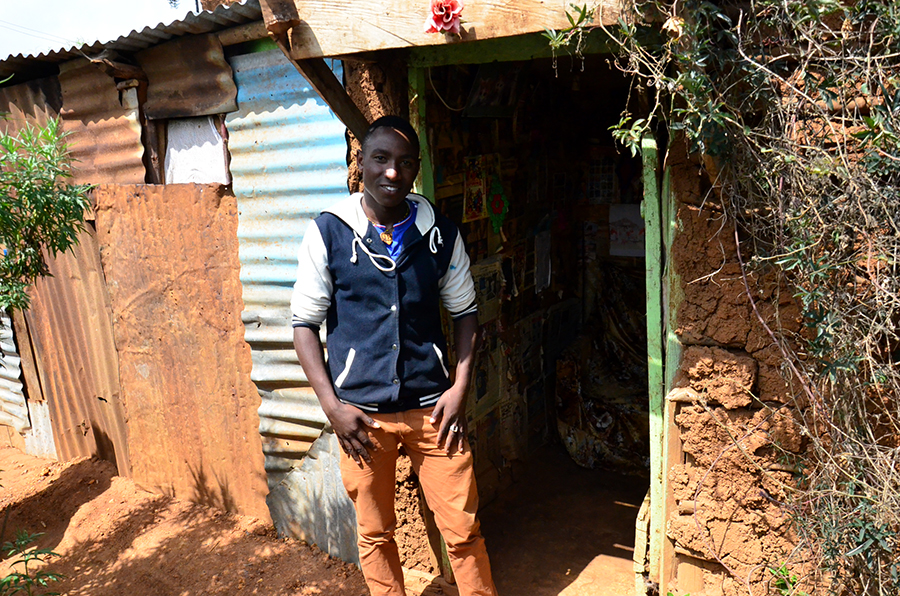 Evelyn walked 8 miles to the nearest hospital to give birth to her second boy. There was no work for her husband in those days. Kenyans living on the edges of the Rift Valley depend on the weather for their work. When rain falls there are crops to plant, tend, harvest and sell – there’s plenty of work to be done.

But when Boniface was born, his mother’s heart was full and the fields were empty. The clouds disappeared and the clay was dry.

Yet, God sees us.

“I heard the church was giving out chances,” Evelyn smiles, clasping her hands together and pausing for a second of silent praise all these years after that miracle.

“It was a long walk for me,” Boniface laughs. “I was very small then.”

He was only five. 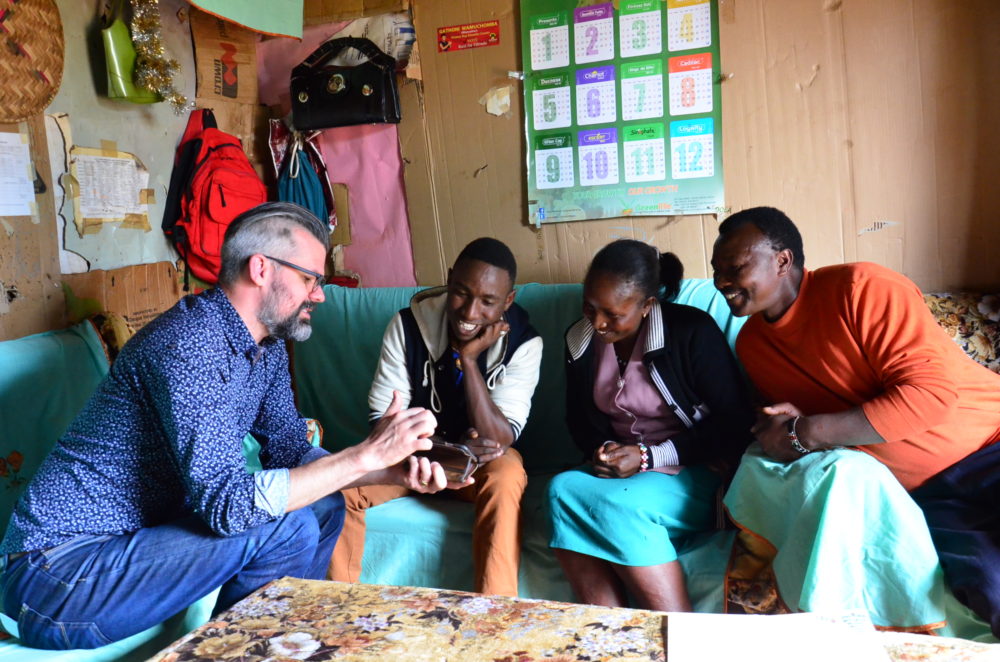 “Can you really remember that long ago?” I ask.

He nods and tells me about the line he and his mother stood in. The pastor and other leaders of the church, along with Compassion staff, interviewed one family after another for hours. “They were looking for the neediest of the needy.”

“I was so happy my son was chosen. God heard my prayers,” Evelyn said. Henry sits quietly beside her but his eyes glisten as he remembers along with her.

Boniface remembers having his picture taken. He’d never had his picture taken before. He stood scared stiff, his arms at his sides, with the same serious straight-ahead stare that greeted me today.

That picture made its way to a website or onto a sponsorship packet that sat on a table at a concert or in a church lobby halfway around the world. And Boniface waited. 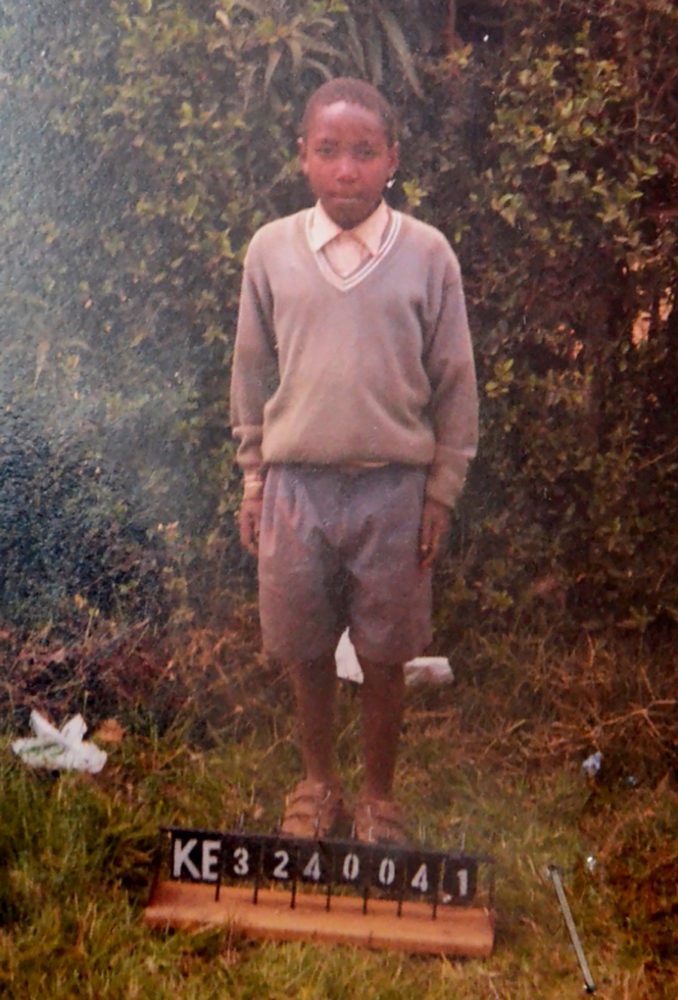 “Do you know your sponsor’s name?” I ask.

And the first toothy smile crosses his face. “Corazon Franklin.”

“Does Corazon write you letters?”

He hurries out the door of his parents’ house down a path to a house of his own. Boniface is twenty now and was able to build a one-room home beside mom and dad that he shares with his big brother.

When he was eleven, Boniface wrote that his dream was to be an engineer. (His fallback plan was musician or secretary.) Right now he’s studying to be a mechanic specializing in repairing electrical systems. “I want to buy my parents a house because right now they rent. And to give my siblings better life.” 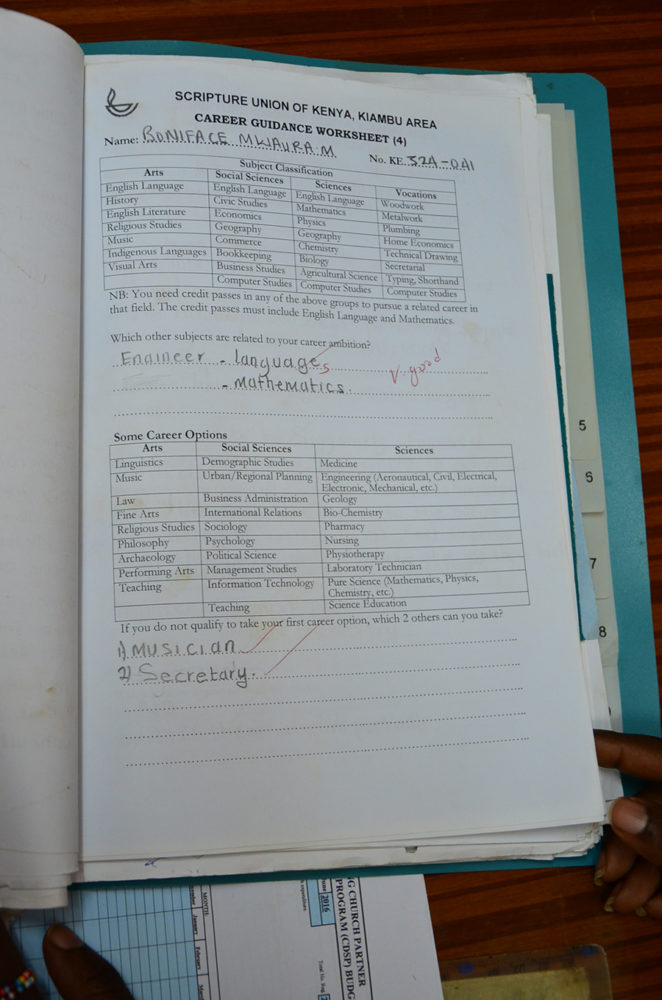 I saw Boniface’s report cards too. Compassion keeps meticulous records on every child they serve. Again and again his Swahili teacher wrote “amka!” in the comments. “Wake up!” So, Boniface wasn’t the most industrious of students. Yet, God sees.

“I understand,” I tell him. “But we made it,” and we laugh and bond over our common academic mediocrity and shared gratitude that God doesn’t just take care of the smartest and most talented down here. He sees us all.

I ask Boniface if he’d like to say anything to Corazon. I tell him I can record a message for him if he’d like. “I can’t promise I’ll be able to get your message to your sponsor, but I’ll try. I want Corazon to hear your voice and see your smile.”

Then it’s Henry and Evelyn’s turn.

Henry says “Amen” and we thank God together. 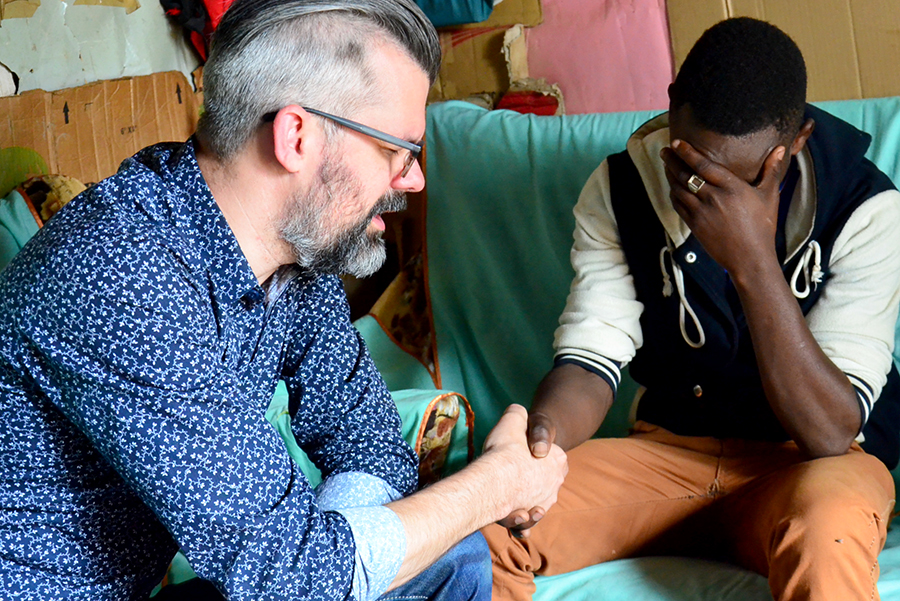 We walk together to the church. Along the way he says his favorite verse is Jeremiah 29:11. “God has a plan for me,” he says. “It is a good plan to prosper me.”

Yes, God does. For all the academically challenged, the hungry and naked, the unemployed father, the praying mother pleading for a chance, the American longing to make a difference but battling skepticism and apathy…

God sees us all. And gives us a chance. 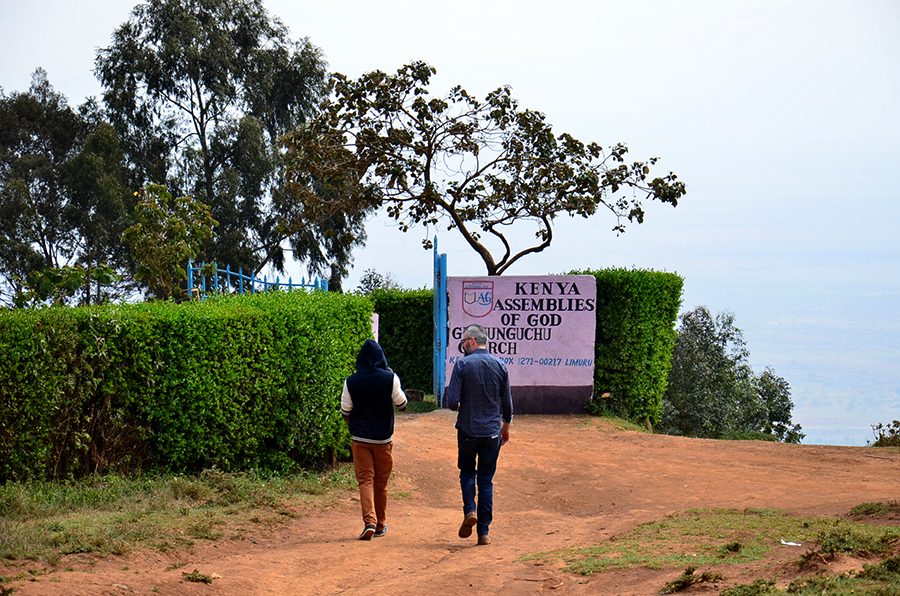 This is your chance. Sponsor a child today.

Don’t miss the posts from the talented bloggers traveling with me in Kenya. Read them all at compassionbloggers.com/kenya2017