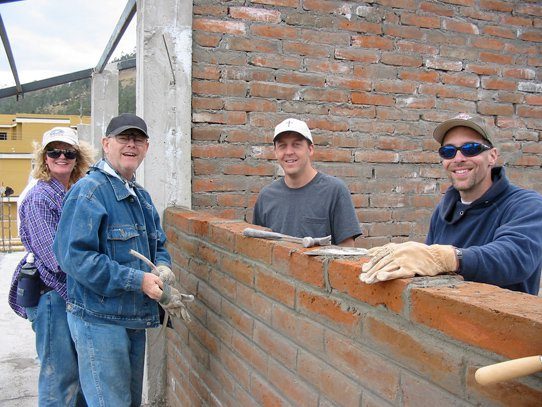 “Contrary to popular belief, most mission trips and service projects do not: empower those being served, engender healthy cross-cultural relationships, improve quality of life, relieve poverty, change the lives of participants [or] increase support for long-term missions work.” -Robert Lupton in Toxic Charity: How Churches and Charities Hurt Those They Help (And How to Reverse It) We gathered at an evangelical church that ran a primary school busting at the seams. Some of our group filled an open space with rocks so that after we left the country concrete could be poured and children would have a place to play four square and whatnot. But I spent the week up in the air, building a second story on the school building. It was 2002.

I’d never mixed concrete or laid a brick before – none of us had – but we were willing to learn. Slowly – very slowly – we mixed gray powder and water with shovels, dished the concrete into a thin layer, smooshed bricks on top of it, and “struck” the excess that ran out in between. My boss was a teenager, one of two locals working on the project with us.

I don’t remember his name but I remember his story told to me through a translator: This boy and his father worked as day laborers – taking any job they could find each day. His job that day was to teach us how to lay brick well enough to finish one wall of the school’s second floor in a week. He said that he and five other local workers could complete the entire second floor on their own in the same amount of time. One Spring morning in 2005 I had a perspective-shifting breakfast with Wess Stafford, the President of Compassion International, and Mark Hanlon, the Senior Vice President of Compassion International’s USA office. I had no idea who they were. A friend from Compassion who’d been recruiting me to speak for the organization for quite some time ambushed me – she offered me free bacon if I’d chat with a “couple of people from Compassion.” Sneaky.

I’d heard the spiel before but I sat through it all again: how Compassion releases children from poverty…blah blah blah. It’s not that I didn’t like the work Compassion said it was doing. It’s just that I had a better idea.

I told Wess I’d rather ask audiences to actually go to another country, to actually do something, to serve the poor themselves instead of paying an organization to do it for them. I didn’t ask Wess if he thought this was a good idea. I was convinced it was because I’d experienced it – I’d been to Mexico and Ecuador and had my worldview expanded in those places, worked hard and felt useful, been moved and inspired. My experience taught me all I needed to know. (I have a history of arrogance.)

I didn’t ask for Wess’s opinion. But he gave it.

Wess grew up in Africa, the son of missionary parents. He told me about the good and bad he’d seen when Americans came to lend his village help. He also servd as a missionary in Haiti. He talked about what he learned there about missions and in the years since that he’s spent serving the poor around the world as the leader of Compassion’s work in twenty-six countries.

Wess gently and patiently taught me about missiology through story-telling. He didn’t speak in generalities, never condemned mission trips on the whole or those who take them, but instead he explained why he was personally passionate about empowering indigenous churches to serve their own communities. Suddenly, the conversation I’d had with my teenaged boss in Ecuador years before took on new meaning. His words had seemed like bragging at the time – six Ecuadorian laborers able to do the work of two dozen Americans – but now I understood what he was trying to tell me. If six men in Ecuador had built the school instead of us, six men would have been employed and six families would have been provided for.

I need to be very clear here. Please don’t skim this paragraph. This is not an essay pitting child sponsorship against mission trips, calling one good and the other bad. I don’t believe Compassion International is the only way to take the gospel to impoverished nations – along with food, education and health care. But I am convinced that churches and missionaries in Ecuador are the best at serving Ecuador – Christians there may need a little help but they are not helpless. The same is true of Christians in India, Guatemala, Uganda, Nicaragua… And I am convinced that while certain kinds of mission trips are needed, most unintentionally do some harm (and sometimes a lot of harm) to the people they are intended to serve.

So while I admire the passion and generosity of the tens of thousands of Americans who go on short term mission trips every year, may I make a humble and humbling suggestion? Doing something, no matter the noble intentions behind it, isn’t always doing best. Here are some books I’ve found helpful in discerning how to help without hurting in the process: