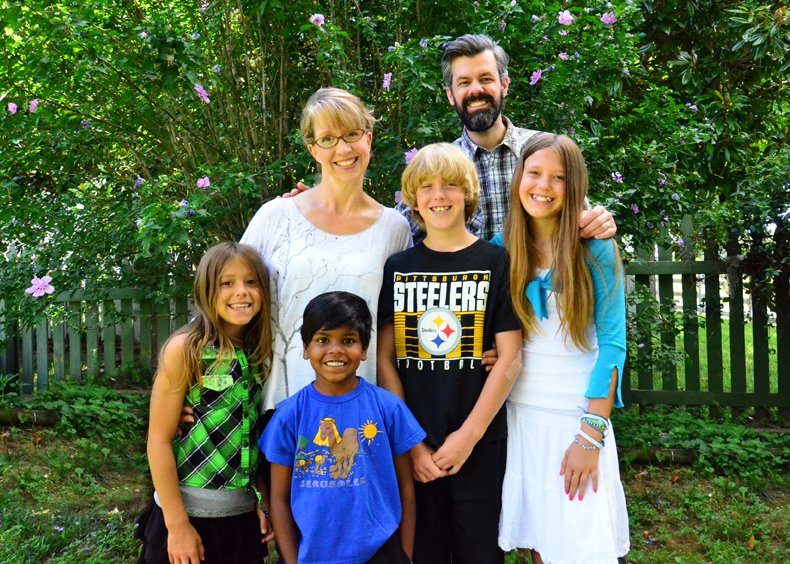 Yesterday was Sambhaji’s “Gotcha Day.” It’s not the day we went to his orphanage in India and brought him home to Nashville – we never did that. Another mom and dad did. Two years ago we received a phone call from our social worker. A couple in our state had adopted a little boy from India but now wanted to “disrupt” the adoption.

They were his forever family for ten days.

Like so much of my son’s story – from birth to our home – there are so many details I don’t know. But I do know this first forever family loved him, gave him his own bedroom and a Woody doll and lots of chicken nuggets, apparently. (He reminds me of this every time I serve him some impostor soy lookalike.)

They had a horse and a swimming pool, a dog and a house so big it looked like a hotel, he says. He had a college-aged big sister who played with him and a dad who napped with him and let him watch lots more TV than I do – so he claims.

“My old mom and dad…” he sometimes starts before telling me something he got to do at their house that he doesn’t get to do at ours. I highly doubt his first forever mom and dad were fine with him never taking baths or brushing his teeth.

But I don’t know that for sure. I wasn’t there.

I wasn’t there to hear the reasons they offered their social worker for the disruption. But I was there when they said goodbye to their boy.

It was a sight painful enough to make even the most ardent adoption advocate think twice before claiming that everyone should adopt.

We met up at a church one Sunday afternoon halfway between their home and ours – many miles from either. Becky and I and our three kids sat in one Sunday school class signing papers. Sambhaji’s mom and dad down the hall in another room doing the same while Sambhaji and his big sister played with Legos and action figures on the floor.

Then the walk from our room to theirs – the fear and joy swirling inside our swooshing bellies. The awkward greetings followed and then we played clumsily with Sambhaji – my kids and I – while Becky did what she does best. She asked Sambhaji’s mom and dad questions about what he liked to eat and play, about his routine, and thanked them with smiles and compliments about his health and obvious happiness.

Their love for him was obvious.

An area doctor who spoke Sambhaji’s language sat in a child-sized chair and translated, explaining to him what was about to happen. He ignored her, sliding his hand into a dinosaur puppet instead…until, after a very few minutes, a social worker looked me in the eyes from across the room and mouthed, “It’s time.”

I shook his father’s hand and pulled him close. I thanked him for loving Sambhaji well, for the important part his family played in bringing Sambhaji to America and into our family. I asked him to pray for us and promised we’d do the same for him.

I think about him often. About the reams of paperwork he filled out and filed, the psychological evaluation he and his wife underwent, the home visits, the interviews, the years of waiting, the expense, the prayers prayed and answered, the hours buying little boy furniture and painting walls, shopping for underwear and socks and shirts and toothbrush. The compassion. The anticipation. The love.

Love is not enough. I understand. No judgement here. We mourn their loss every year as we celebrate all we’ve gained.

Yesterday was Sambhaji’s “Gotcha Day.” The first time I saw him smile and the first time I heard him cry. We’re all forever marked by that first hello-goodbye.

“When do I go to a new house?” he asked just days ago.

“You’re not going anywhere,” I said. “I’m your dad forever.”