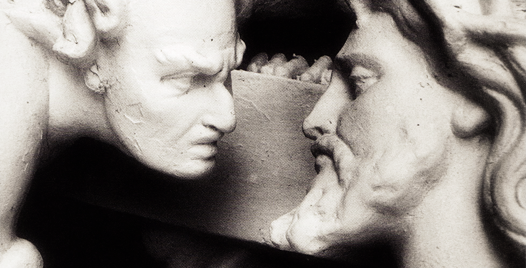 Was it a dream or was it Satan himself actually standing at the foot of Martin Luther’s bed that night? Luther wasn’t sure.

But there he stood – nightmare or in the flesh – holding a scroll. Unrolling it, Satan read his list aloud: every impatient snip, every lie told convincingly, every second glance at the opposite sex, every gossipy morsel traded in the disguise of concern. Satan pronounced them all, every sin Luther had ever committed. Or so he thought.

When Satan finished his recitation Luther didn’t lie there defeated and ashamed, but sat up ready to confess. “Think harder. Surely you forgot some.”

Satan, not being omniscient, only knew the half of Luther’s sin – the half that could be seen. Luther listed for the Devil the sinful thoughts, feelings and desires that never became action but hid inside the reformer out of sight. Satan added these to his list.

Then Luther declared, “Now write these words across your list: The blood of Jesus Christ, the Son of God, cleanses me from all my sin!”

And Satan slinked away in silence, defeated by the truth.

The truth is a powerful blade (Ephesians 6:17) with two edges. One is the holiness of God: He hates sin. The other is the love of God: Nothing can separate us from it.

One edge for each of the primary devices Satan wields against us: Temptation and Accusation. The holiness of God destroys temptation or apathy toward sin. In Ephesians 2, Paul uses the word “disobedient”, translated from the Greek word apeítheia, from which we get our word apathetic. It means to be obstinate, stubborn and unmoved despite attempts to persuade. To be unmoved.

Isn’t temptation most powerful when I am least moved by the things that move God?

But awareness of God’s holiness rouses me from uncaring, unfeeling disobedience. I hate sin because Christ is in me hating sin.

Luther resisted the Devil by first agreeing that he was a sinner, an admission that God burns with white-hot anger toward sin and then, through confession, Luther piled more logs on the fire. But stopping there would have been dangerous. Being convinced of God’s holiness but not His love leads to legalism and defeat.

The love of God – unconditional and unbreakable – destroys accusation and shame over sin. In Ephesians 2, after detailing just how wayward our flesh and the world we’ve created truly is, Paul gushed about God’s love for us. He told us all that God’s love has moved Him to do to forgive us, rescue us from death and separation, make us His children, regard as if we are as perfect as Christ Himself, to reunite us with Him forever and give us a meaningful life being his love-in-action on earth today.

EPHESIANS 2:1-10 2 As for you, you were dead in your transgressions and sins, 2 in which you used to live when you followed the ways of this world and of the ruler of the kingdom of the air, the spirit who is now at work in those who are disobedient. 3 All of us also lived among them at one time, gratifying the cravings of our flesh[a] and following its desires and thoughts. Like the rest, we were by nature deserving of wrath. 4 But because of his great love for us, God, who is rich in mercy, 5 made us alive with Christ even when we were dead in transgressions—it is by grace you have been saved. 6 And God raised us up with Christ and seated us with him in the heavenly realms in Christ Jesus, 7 in order that in the coming ages he might show the incomparable riches of his grace, expressed in his kindness to us in Christ Jesus. 8 For it is by grace you have been saved, through faith—and this is not from yourselves, it is the gift of God— 9 not by works, so that no one can boast. 10 For we are God’s handiwork, created in Christ Jesus to do good works, which God prepared in advance for us to do.

And all this is “grace” – a gift Jesus earned for me by dying and rising from the dead. Not a gift I earned or deserve. Now, if I didn’t deserve to receive this gift how can I now be convinced I’m so bad I don’t deserve to keep it. Jesus deserved it for me, being perfect in my place, being punished in my place. And now Jesus keeps this gift for me, God’s love being “in Christ” unable to be snatched away by me or Satan or anyone or anything else. He is the impenetrable fortress keeping my salvation! The gift is mine forever!

ROMANS 8:38-39 For I am convinced that neither death nor life, neither angels nor demons, neither the present nor the future, nor any powers, neither height nor depth, nor anything else in all creation, will be able to separate us from the love of God that is in Christ Jesus our Lord.

Luther wielded this truth against Satan. “Jesus Christ, the Son of God, cleanses me from all my sin. (1 John 1:7) The declaration of the love of God unravels the lie of shame brought by accusation.

Love without holiness removes God’s wrath, and with it the need for a Savior to absorb it, and leads to licentiousness. But love coupled to holiness gives us Ephesians 2:1-10, a reason for wrath and the need for a Substitute to suffer on our cross. Love with holiness gives us a one-two punch of our own with which to fight temptation and accusation until the Devil slinks away silent. 2 comments on “The World, The Flesh & The Devil Part 6: The Victor”