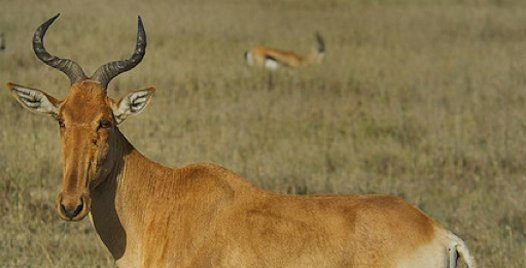 We were asked if we wanted to go on a safari.

Then the guide warned us that the elephants in the area had been acting “strange.” Violent is more like it. Just the female elephants. Knocking over trees, even running at a safari vehicle a few days before.

“And also…” he went on. The LRA, or Lord’s Resistance Army, a terrorist organization, had been spotted in the park in recent days.

“Are they very dangerous?” I asked.

“Only if you’re white,” he smiled.

I wasn’t sure free was even cheap enough…then he introduced himself. His name was Emmanuel.

If you’re driving out to face perimenopausal elephants and a terrorist regime it’s best to do so accompanied by a man whose name means “God with us.” It also helps if he carries an AK-47. And he did. So we set off across the savannah with Emmanuel in the driver’s seat, teaching us about plants and animals and insects he spotted along the way.

At one point he stopped our truck. Turned it off completely. Looking out ahead I saw why: A deer-like animal stood a few yards in front of us, in the middle of the road, chewing, looking across the plain seemingly unaware that we had even arrived. The lion, Emmanuel said, chases the hart beast for 100 yards or so and then lies down in the tall grass. The hart beast soon stops running, forgetting why he even began in the first place. He looks around and, seeing no obvious danger, lowers his head and begins to eat. “And that’s when the lion eats.”

When the hart beast forgets.

There are two common mistakes we often make when thinking about evil – specifically, the devil. I’ve sure made them both.

One is to miss his existence entirely, to operate as if all that is is only what we can see. This has been called materialism.

At the opposite extreme is the Christian who sees a demon in every shadow, blaming the devil for every misdeed of our own and every bump in the road: the sniffles, a run-in with the boss, rush hour traffic. This is superstition.

Like most extremes, superstition and materialism are more simplistic than the truth. The bible offers us a true but more complex and nuanced explanation of evil.