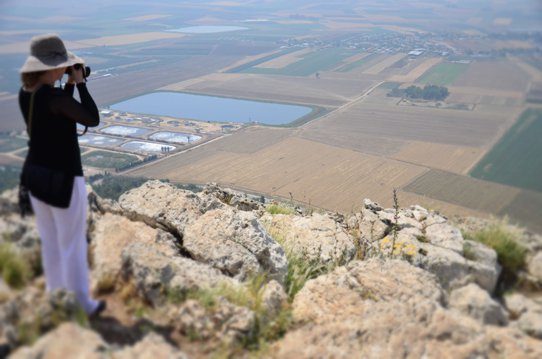 He raises his hands in the air and declares in Ugandan flavored English, “The time has come! The kingdom is here!” Over his shoulder, far down below, a modern city hums. People drive from home to work. A KFC bucket slowly spins on a pole jutting up from the sea of densely packed lightly colored buildings. Hard to imagine this place two thousand years ago. Danny, our Israeli guide, says no more than ten families lived in Nazareth back then. A population of no more than 150. Probably less, he says.

I think about my own small town in Tennessee. Main Street. The Farmer’s Co-op. A bedroom community shared by cows and cars, farms and low-priced starter homes.

A kid can’t get by with anything in town like Nazareth. Someone who knows mom will see…and tell. The people of a small town have a way of keeping one another small too don’t they? Expectations grounded by familiarity. Hard to imagine the boy next door as anything other than the boy next door. And in a town like Nazareth, isn’t everyone next door?

“Isn’t that Joseph’s boy?” the hometown crowd muttered in the synagogue one morning. Jesus had been invited to speak. The text was chosen in advance, part of the scheduled lectionary. Just so happens the scroll the attendant handed Jesus was Isaiah and the passage prescribed that day was a Messianic prophecy.

“The Spirit of the Lord is on me,” Jesus bellowed. “He has anointed me to proclaim good news to the poor.”

Neighbors leaned in close, some with bellies growling, as the words of Isaiah explained why the Messiah’s message would be “good” for the poor.

“He has sent me to proclaim freedom for the prisoners and recovery of sight for the blind, to set the oppressed free, to proclaim the year of the Lord’s favor.”

Then Jesus rolled up the scroll and handed it back to the attendant. It was time for the visiting rabbi to expound on what he’d read. The eyes of the crowd were fastened on him as he began. “This scripture has just come true – just now – while you were listening.”

Kids Jesus played with as a boy, now all grown up and with kids of their own. Men who worked with Joseph in construction. Mary’s friends, the ones who’d beaten their laundry against rocks and rinsed them in spring water beside her for years. –Everyone was there. Everyone was surprised at how articulate and confident “little Jesus” had grown up to be.

“You will undoubtedly quote me this proverb: ‘Physician, heal yourself’—meaning, ‘Do miracles here in your hometown like those you did in Capernaum.’ But I tell you the truth, no prophet is accepted in his own hometown.

“Certainly there were many needy widows in Israel in Elijah’s time, when the heavens were closed for three and a half years, and a severe famine devastated the land. Yet Elijah was not sent to any of them. He was sent instead to a foreigner—a widow of Zarephath in the land of Sidon. And there were many lepers in Israel in the time of the prophet Elisha, but the only one healed was Naaman, a Syrian.” – Luke 4:23-27

The crowd’s mood shifted suddenly from amazement to madness.

Family friends turned furious. The angry mob leapt from their seats, grabbed Jesus and dragged him up Mount Nazareth.

They aimed to silence the self-proclaimed Messiah once and for all, to boot him into Jezreel Valley below.

Battles were fought in the valley long before. God’s armies defeating God’s rivals on the open plain.

Jezreel. “God sows”. God tends his people here. He protects them from lunatics and liars. He plants his foot firmly in this soil and cuts down his enemies like wheat at the harvest. A good place to get rid of Jesus – the blasphemer, the mock prophet, the hometown boy who lost his mind and claimed to be divine. They neared the cliff’s edge and for some reason their grips loosened. Were their fingers pried from his biceps by a convincing argument, another quote from Isaiah, his silence or…

Jesus turned toward the crowd, walked through the familiar faces, and on to Capernaum. (Mt. Tabor is the round peak on the left. Nazareth is to the right and begins where the white building is.)

23 comments on “The Fifth Gospel: Nazareth”