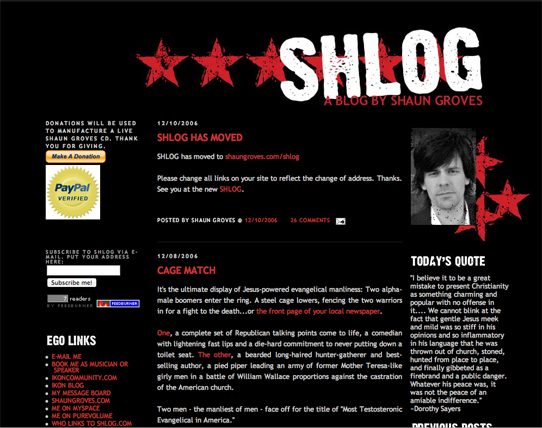 Next month this blog will turn eight! But before it was a blog it was a…

I was on tour with Bebo Norman and a very young Katy Perry back in 2001.

Most nights, after the concert, I’d read fan reviews on the message board of Bebo’s website. And sometimes I’d say “thanks” or answer questions people asked about life on the road, what song Bebo played third, what kind of guitar Katy was using…

Record labels created a gap between artist and audience (inadvertently, I’d like to think). I heard a stylist say once “Wearing what they can’t have makes them want you more.” Artist websites were pamphlets that maintained this distance: places to read a label-crafted bio and press releases, look at professionally Photoshopped publicity pics, and see a listing of upcoming tour stops. They kept audiences informed but not connected.

But Bebo’s message board closed the gap. At the end of that tour in 2001 my label put a message board in the first shaungroves.com. Not only that, they added one to the site of every artist on their roster. I spent an hour every morning and evening reading and responding on my message board. Until Randy Elrod suggested in 2005 that I launch a blog.

Randy was the newly hired forward-thinking “Worship Arts Pastor” at the church I was part of. He was younger at heart than guys half his age and contagiously passionate about blogging. He suggested I read Hugh Hewitt‘s book Blog: Understanding The Information Revolution. And I did.

I started a blog unwisely named Shlog. Shaun + blog. Get it? Me neither…now. Readshlog.blogspot.com launched in May, 2005. My label was immediately divided over my blogging. An intern thought it was genius. The president thought it was a narcissistic fad. The publicist expressed concern that the laser beam focussed messaging and image she’d crafted would be diluted by daily posts that were out of her control. There was a brief attempt to get me to stop blogging, but my contract gave control of shaungroves.com to my label yet didn’t prohibit me from launching a site of my own.

In 2006, my label closed its doors and gave me control of shaungroves.com. With the help of a mom in Texas named Kat (now head honcho at Inspired to Action and How They Blog) we redesigned shaungroves.com as a blog – not a typical artist site. As far as I know it was the first artist site of its kind.

I met Kat at the smallest concert I’ve ever played. Had the crowd been larger we may have never gotten to talk; I may have never learned she’d once worked as a web master for a radio station. I would have never known about her interest in taking on a web project “just for fun.” And it was fun – to reimagine what an artist’s web presence could look like and accomplish.

I did all the graphics. Kat did all the hard stuff. Unfortunately, we kept the name “Shlog.” The site I have today launched in 2009. The overall design was created by Brad Ruggles. The illustration at the top and bottom came from Barton Damer. And the hours of coding were done by Ben Stewart (now founder of Louder Media, a web design and development company).

The biggest and hardest change in 2009 was killing the message board. A tiny but close knit community had formed there over the previous eight years. I certainly got an ear-full from them when I took their gathering place away. But it needed to happen – with the advent of social media there were better places for that community to congregate…places that could even make it grow.

Another big change? No more Shlog. No more awkward conversations after concerts in the lobby of churches in which one woman asks another “Have you seen Shaun’s Shlog? You have to!” True story. Ben and I are beginning to plan the next rebuild of shaungroves.com. And I’d love your input.

What sites do you love the look of?

What sites just work so much better than this one?

What’s in the way here?

If money and time and technology were limitless…what would you like to see in the next shaungroves.com?

The Christian Alliance For Orphans and I are teaming up this Wednesday, April 24th for a free webinar on Harnessing Social Media For Good.

If you or someone you know is interested in learning more about using your online voice for good, register now for Wednesday’s free webinar. Class starts at 2PM Eastern and lasts until 3:30 with a time for Q&A.