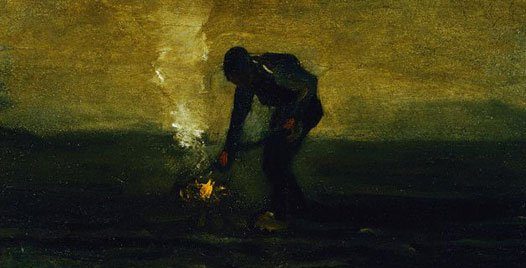 This is the last of the old essays on depression I have to repost. Tomorrow I’ll write one last essay on the subject – a new one on what I’ve learned in the last two years about depression. I think it could be the most helpful of the bunch, so if you’re in the thick of it right now, or caring for someone who is, be sure and come back tomorrow.

If my mom wanted to know how my day really went she would stand outside my door after lights out and listen to me pray.  I would tell God about filling the cheese dispensers and walking in the deep freeze on the field trip to Pizza Hut.  I would tell Him how much I didn’t like it when Ted Andrews made up the rules in kickball as he went along.  I would tell Him about the fight Lindy and I got into and how Mom didn’t understand that I pulled her hair after she rolled her eyes at me, not before, but I was sorry.  I told God about how scared I was of Mrs. Roosth and how I really hoped we would have burritos with melted cheese at lunch soon.  I told Him about hitting Ben when he said that thing about my mom during the soccer game.  I told Him about kissing Shanna in the tunnel.

A few months ago I realized that God and I had become like that couple I feel sorry for in restaurants, aware of one another’s existence but never acknowledging it with eye contact, a syllable or smile.  Maybe they’re still in love but they’ve reached the bottom of one another, run out of discoveries. Maybe the relationship evolved into a duty. Maybe there was a spat – over something that would seem trivial today if they could only remember what it was – and they each delayed “I’m sorry” until silence and avoidance just became their way of life. Maybe, somewhere in all the bustle of child raising, soccer practices and dance recitals, ladder climbing, house cleaning and 401K building they just got out of the habit of connecting and now they can’t remember how to.

I think that’s where God and I have been for the last – I’m ashamed to say it – couple years.  Maybe more.  I can’t remember it happening.  I just realized not long ago that it did.

So, as sick as it sounds, I was glad to be depressed.

My depression ended July 19th, in Lexington, North Carolina at 6:57 PM.  That night I talked to my wife for a few minutes by phone.  I sang through the usual warm-up exercises. I ate a spinach and strawberry salad.  And then I walked down the stairs to use the restroom in the basement below the stage.  Somewhere between washing my hands and ascending the staircase the darkness ended.

As the pastor made some announcements and prayed, I stood behind him tuning my guitar and trying out my newly depression-free body.  Can I smile? Yes.  Effortlessly.  Can I raise my eyebrows? No problem.  How about my feet?  Are my feet heavy?  Toe tappin’ light.

I’ve read about the lives of great God-followers and a lot of them experience a time of tremendous darkness.  Usually, at the end of that time, they experience something supernatural, something certainly from God: A great revival in their city, a vision, a doctorless healing, a whispered word from God, an angelic visitation, a sign in the sky, an unexplainable turnaround. At the very least, these men and women seem to emerge from the darkness with a greater certainty about the existence of God, His involvement in their lives and the direction He’d like them to head next.

Even in the times when I was fetal on the bathroom floor yelling at God, certain He didn’t exist or that He had abandoned me – even then I hoped He’d prove me wrong and touch me like He touched Jacob.  Maybe I’d limp away from the darkness, I thought, but that limp would be undeniable evidence that I mattered enough to be wrestled with by the Almighty.  Proof.  A miracle.

My thinking went like this: My distress means eventual miraculous rescue by God. Rescue means God is real, He’s here, and I matter.  Like I said, I was actually glad I was depressed.  I would soon see God.

But the miraculous didn’t happen.  What happened was a trip to the bathroom.  No burning roll of toilet paper in there either.  No pillar of cloud leading me to the stage.  No whispered voice.  Not one chill or warm fuzzy.  Nothing out of the ordinary.  The depression switch just flipped to the off position as suddenly as it had switched to the on.  That was that.

So I stood before a crowd of bored-looking Christians that night and celebrated my lungs out.  I went for notes I’d never dare reach for ordinarily. I played too many songs.  I smiled endlessly. I wished I had written more upbeat music. Why didn’t I write more upbeat music?

Then, I went home, took a few days off, slowly went back to work and started telling you this story so I wouldn’t forget.

I’m not depressed anymore but I’m not well either.  I’m afraid to read the comments on my blog and on Facebook. As well-intentioned and loving as they may be, the words of Christians pose a greater risk to my faith right now than the words of any renowned reasoned atheist. I can’t explain why, but they do. And I’m angry at God sometimes for reasons I don’t completely understand.  Also, I’ve liked to talk to people after my shows but I’ve discovered that I can’t listen to other people’s needs for long right now without feeling exhausted.  My tank is too empty to give much away at the moment. One friend described this recovery period as having a wound and not a scar – I’m still pink and sensitive in places I didn’t know I had, but healing little by little.

Most troubling to me? Most mornings since the depression ended I’ve woken up anxious and filled with doubt – not about anything in particular, just a general feeling that God isn’t with me.  And “feeling” really isn’t the word.  I sense in my spirit, I’m convinced way down deep, that God is not with me if He exists at all.

We’re not even sitting in the same restaurant.

My counselor says he doesn’t want to fix that – even if he could.  He refers to it as an “unsatisfied hunger” or “un-crossable distance” that is necessary to experience in order for God to satisfy it and mature me in some way.  He says this hunger is more the norm for the Christian coming out of darkness than the dramatic miraculous rescues we read about in some books.  And I don’t like this.  But I asked for it.

In the few months leading up to this depression I realized I wasn’t the little boy talking to heaven about my day at school anymore. Over and over I asked God to make me need Him, to let me experience Him, to force me to talk to Him since I wasn’t able to choose that over all my “important” tasks.  I begged Him to do whatever it took to get us making eye contact and telling stories again. I guess He heard me.

I’m usually the last one awake in my house, but this morning I was the first.  I was unusually alert and felt like I needed to pray.  I sat in the den floor alone and prayed for my Uncle Joel and his cancer, for my friend in rehabilitation and for his family, for Becky and the kids, for my upcoming trip to El Salvador, for Wess and everyone at Compassion International, for requests left on my blog and on Facebook. I opened my bible to a list in the back of all God’s names and I told Him – through my doubts – that He was all those things. I told Him I was angry too, that I was scared, that I believed but needed Him to get rid of my unbelief.

Then I just sat and listened.

The house was still.

I was a boy listening to God.

And He didn’t say anything. But we were in the same room again. And that was miraculous.