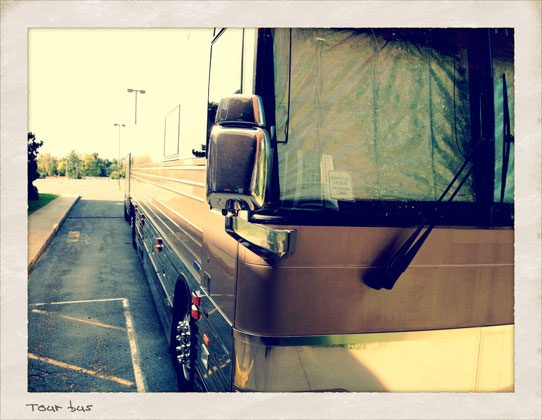 Usually it’s just me and Micah on the road. We fly out on a Friday morning, land someplace, rent a car, hit two or three cities, and fly home. I have all week to work with Compassion Bloggers, blog, write…whatever. It’s a nice predictable groove.

But then Compassion asked me to open for Mark Schultz and Anita Refroe this month – to ask their audiences to sponsor kids.

Out with the old groove. In with the new.

Now, we depart by bus from a supermarket parking lot at midnight on Wednesdays. The bus drives all night while we sleep in our coffin-like bunks. There are twelve bunks in all, full of artists, supporting musicians, crew, one comedian and her husband. The musicians are let out at a hotel for the morning. I worked this morning – returned emails, made phone calls, ordered more CDs, added interviews and appointments to my calendar. While watching Dan Patrick. After dropping off the musicians, the bus goes on to the venue (a church or theatre) where the crew gets out and goes to work. Daniel runs sound and Kenny runs video and lighting for Streamline Production Group. Kenny also looks like Gimli so let’s call him that from now on, okay? These guys are the hardest workers out here, the first ones up and the last ones to bed every night. They work with a team of volunteers in each city to get the stage and gear set up and torn down every day. Around noon a runner swings by the hotel to pick up the freshly showered and shaved musicians. We plop our stuff down in dressing rooms, give the daysheet hanging on the wall a lookover and then we sniff out catering. After lunch I work some more (if blogging is work) until it’s my turn to soundcheck. Then Micah and I set up our instruments, stum a little, thump a little, la la la a little and then wait. We wait through everyone else’s soundchecks, through dinner, through a pre-show meet & greet with VIPs…before the concert finally begins. I’m the first one up, singing three songs and introducing Anita. Then it’s Mark’s turn. And then I get to talk about Compassion before intermission.

During intermission I head to the lobby to help collect sponsorship forms and answer any questions folks might have about child sponsorship.

After fifteen minutes, the show kicks off again with another set from Mark and Anita. I call my wife, hang out with Compassion volunteers, watch football on the bus if it’s Thursday. Then it’s time to pack everything up, get back on the bus, and sleep all the way to the next city where we’ll do it all again. Minus the football because, dang it, there’s no football on Friday nights. My personal goal is to see 600 kids sponsored on this little twelve city tour of ours. Will you pray for every person in every seat, for clear communication from the stage and cheerful response from the crowd? Thanks.

Is there anything about life on the road you’d like to know more about? Something you want to see?

36 comments on “What’s An Average Day On Tour Look Like?”