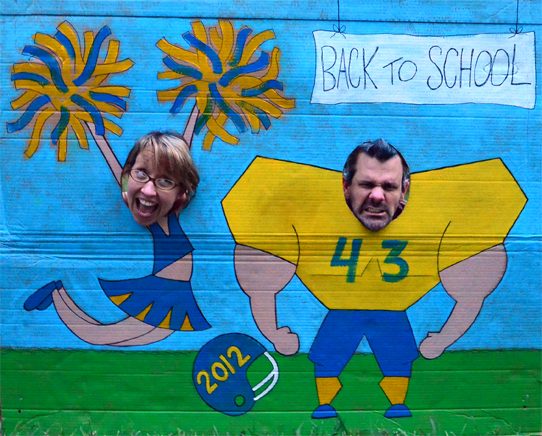 Years ago, when we opted to homeschool our oldest instead of putting her on the bus to kindergarten, the public schools in our area hosted back to school bashes. Not wanting Gabriella to feel left out, Becky threw the first ever cul-de-sac back to school party. It’s a tradition that got replaced last year by a small family trip to get ice-cream. Adoption is hard…especially in the beginning.

But the back to school party made a comeback Friday night! I made this shooting gallery out of golf tees and ping pong balls. (Thank you, Pinterest.) Oddly, the game the most kids line up for every year is a simple guessing game. Becky cut two arm holes in a box. She cut two sleeves off an old sweatshirt and taped them to the holes so kids can put their hands through the sleeves and reach into the box. On the backside of the box Becky sits and places an object in the kid’s hands. The kid guesses what it is. It’s that simple. I have no idea why this is so fun.
But the line is long every year. And, of course, there were cupcakes. And unsupervised bowls of every kind of sprinkle Publix sells. You only start school once…or twelve times. Anyway… But the best part for me every year is the people. Our cul-de-sac has a lot of turnover. Every house but ours has been foreclosed on in the last two years. And now we’ve got a rental in the cul-de-sac – a revolving door. Neighbors come and go too regularly.

We know all the kids in the circle. They play at our house every day. But don’t always know their parents. The back to school party has become the easiest way to turn them into new friends. And there’s nothing I like more than meeting new people.

I think we had 19 kids at the party. Every shade, all ages, home schooled, public schooled. The front yard looked like a meeting of the United Nations…or heaven.

So we took pictures – lots of pictures. To remember. Because we only have 12 more parties left – and I’m not sure how much Sambhaji will want to play the guessing game with mom when he’s a senior in high school.

And besides, these are the kind of pictures rehearsal dinner slide shows were created for right?