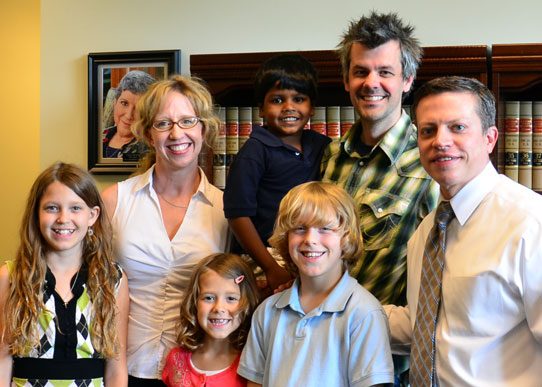 He was named by a police officer in India. One name. Like Madonna. But we added on today.

We made the trek into the big city for a nice lunch and an appearance before Judge Smith at the county courthouse. Ten months ago my cell phone rang. I was speaking at a festival in New York. Becky said our social worker, Kim, wanted to know if we could foster a little boy from India. And possibly adopt him someday. She needed an answer in 24 hours. Sambhaji’s situation was complicated and unusual. We took him into our home, into our hearts, not knowing if he’d ever be our son. We prayed and waited and rode the ups-and-downs of the on-and-off-and-back-on-and-maybe-off-and-back-on coaster of his adoption into our family. It’s been the hardest ten months of our marriage.

But I’ve also been surprised – amazed – at how much I love this little guy who was a total stranger just ten months ago. And how much closer our entire family is today than we were before Sambhaji came to live with us. I’m shocked at my ability to love him like my own. How he has become my own. He is my own.

Today’s he’s mine on paper but I feel like he’s always been. It became official today when an attorney sat with us and Judge Smith, read a few sentences, asked a few questions, and then handed some papers over to be signed and sealed.

And now he has three names. Sambhaji is the name of a great warrior king in India. A warlord, the story goes, took over all of India except the province Sambhaji ruled. Sambhaji stood up to the warlord and his armies, outnumbered, against the odds.

David is my father’s name. The man who taught me how to be a father. Without my father’s love for me I’d never have been a father to Sambhaji. We love because we have been loved well.

Groves. A name carried by pasty pink faces from Wales to the Carolinas, to Texas and now to Tennessee…just got a little more colorful. Who knows what greatness Sambhaji will add to our legacy? Thank you,Kim and everyone at Miriam’s Promise in Nashville, to Judge Smith, to Holt International, to the wonderful caregivers who raised Sambhaji so well in India, to Allison Clanton our family therapist, to our church and closest friends and family who’ve listened well and cut us slack and encouraged, and to all of you on the internet who prayed and rooted for us through these last ten months. We’re a family of six now! Thank you for the part you’ve played along the way.

As for Sambhaji’s perspective on all of this…

I explained to him that Judge Smith was going to sign a piece of paper that would make me his Daddy forever – that he’d always be ours from now on. “What do you think about that?”

“Awesome!….Please can I have ice cream?”