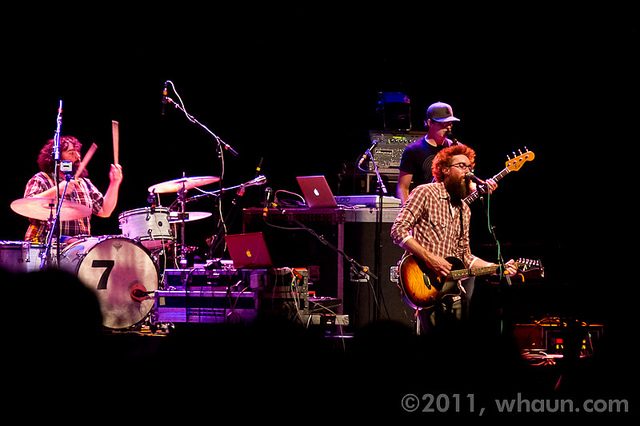 There’s no such thing as a self-made man. On the back wall of the church hung a framed picture of Bill Hybels, our patron saint of attractional church. It was the early nineties when Chris Seay (pastor), David Crowder (music guy) and lots of their friends launched University Baptist in a white dilapidated hand-me-down wooden church on the campus of Baylor University. I played sax in the “praise band.”

But on a few afternoons, instead of napping – Wasn’t college great? – I’d sit in the sanctuary in a folding metal chair and play guitar with Dave and a few other guys. Everything – beyond G, C, D and E minor – I learned by watching and copying those guys.

Now, there was at that time a coffee shop on campus called Common Grounds. The owner was a member of University Baptist and let Crowder and other musicians play there on Thursday nights to advertise the church and attract more people to our services on Sunday mornings. (That worked better in theory than in practice but that’s a life lesson for another post.)

Dave was the guy deciding who would play and sing on which Thursdays throughout the year. One day Dave asked me to fill in for a singer songwriter who needed to switch dates. (If memory serves me right that singer was Robbie Seay, Chris’ little brother and “Uncle Robbie” to my kids today.)

There was no piano in Common Grounds and I barely played guitar. In less than a week I had to write four songs I could play on guitar and put a band together. I got this amazing freshman drummer, Jeremy, to play with me. And this girl named Marcy, who could strum circles around me, to play guitar and sing harmonies.

The night of the gig I threw up before going on stage. We played through our four songs way too quickly, took an intermission at which I threw up again, then played those same four songs a second time – a little slower.

I swore I’d never sing in front of people again – I’d stick to the sax – but after I brushed my teeth and my anxiety wore off I realized I was hooked: I’d connected with people in a way I’d never before experienced.

It was Robbie’s change of plans and Dave’s invitation that turned me into a singer songwriter.

Dave and Robbie and I eventually signed record deals. We’ve bumped into each other on the road occasionally. But I’ve never played a concert with Dave until Sunday night. Compassion International brought me out to play a couple songs and ask Dave’s audience to sponsor children, which is usually the highest high of the night for me: hands raised all over an auditorium, sponsorship packets passed out to the generous, dozens of kids released from poverty in Jesus’ name.

But Sunday night I finally thanked Dave (and his drummer Jeremy – aka Bwack) for their influence on my life all those years ago. There may have been hugs. And I may have teared up just a little.

So good to remember, to give thanks…and credit where it’s due.

By the way, Robbie has a new CD out called Rich & Poor that’s well worth the listen and his last disc, Miracle, is still in heavy rotation in my house. And Crowder has released a batch of Christmas tunes like none other (on iTunes & Amazon). Check ’em out.

14 comments on “Where Credit Is Due”