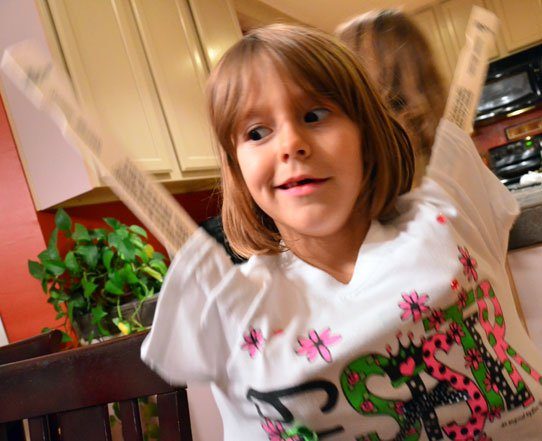 It’s been five months since we last saw Mimi. When Sambhaji’s chair was added to the dinner table she just stopped showing up. For a couple years she’d been arriving just after supper, with her props and rubber-faced expressions and slow southern drawl.

“Shaaaawwwwwn,” she once said,” how’ve you been, sweety? Tell Mimi about it?”

As I told Mimi about my day she dozed off and then, a moment later, suddenly came to…

“You’ve been a jerk all day? What’s that? I can’t hardly hear ya Shaaaawwwwwn.”

“Oh, you’re hurt? Let Mimi see it, Shaaaaewwwwn. Where does it hurt?”

Five months without Mimi is a long time. Time spent by the formerly last born finding her new role in the family, her new place at the table. A long time for showmanship to hibernate, debating whether it was safe to come out – Will they still pay attention?

Five months of one-on-one time, countless reassurances of love – the daddy kind that cannot be divided by addition. Mimi was born in a conversation lull when Penelope was almost five. Mimi is an impression of Penelope’s great grandmother – also named Mimi and also speaking in slow southern drawl and also elderly. But not half as funny as Penelope’s caricature. No offense to Becky’s grandmother, but she’s no prop comic. Last night, Mimi, having lost her arms in some sort of accident, arrived for dessert with wooden limbs made of paint-stirring sticks, and complaining about having her picture taken in such a poor condition. We haven’t laughed so hard in five months. For the last five months I haven’t stopped wondering (worrying) if Mimi – and Penelope – would ever come back to the table.

Just one of hundreds of answered prayers. Thank you for speaking them on our behalf, friends.

“A happy family is but an earlier heaven.”
– John Bowring

20 comments on “The Return Of Mimi”