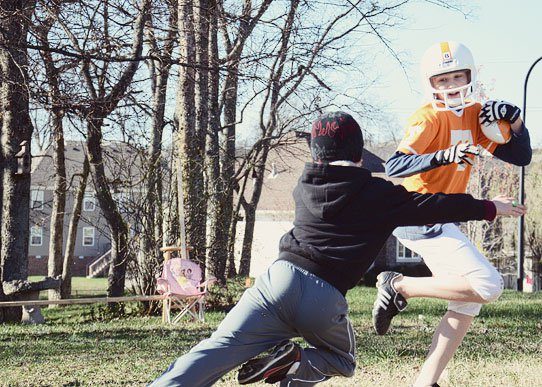 UPDATE JUNE 18, 2011: The school board is now pursuing a compromise, working on policy which would allow homeschooled students to participate in extracurricular activities if they first enroll in one public school course. I applaud this progress and am grateful for the efforts of school board members who’ve worked hard to craft and promote this change in policy. Thank you.

I’m thankful for the opportunity to correspond with you on behalf of some in the Williamson County homeschool community and my three children concerning provision 4.301 – policy denying educational equity for homeschooled students.

My son sleeps with a football and beneath a picture of Troy Polamalu. He wears a Steelers jersey most days and often repeats his lifeplan to near strangers who ask him what he wants to be when he grows up: To play football for Auburn, then the Steelers, then coach, then join the Hall of Fame.

I’m just a musician but more athletic men than I say he might actually pull it off.

The Tennessee Secondary School Athletic Association (TSSAA) issued a ruling allowing local school districts to grant homeschooled children access to extracurricular activities like football but the ruling does not mandate that school districts must grant such access. A bill was introduced by Rep. Campfield in the state legislature in 2009 which sought to mandate educational equity of this nature but it died in committee in 2010. It stated that “interscholastic extracurricular student activities are an important complement to an academic curriculum. Participation in a comprehensive extracurricular and academic program contributes to the development of social and intellectual skills necessary to become a well-rounded adult.” The TSSAA’s ruling, and the now dead bill HB 797, at the very least imply together that transforming children into “well-rounded” adults is an aim of Tennessee’s education system. And is no doubt in the best interests of both students and the state itself.

Yet without being forced by mandate to grant equal access to homeschoolers, many school boards in Tennessee have reportedly not done so. I was dismayed to learn that the Williamson County school board is among them. Even more surprised to learn that the decision not to allow all academically qualified students access to public school extracurriculars may be, at least in part, financially motivated and is not likely to change in our present economy. This was made clear to me in a brief phone call with the county’s athletic director yesterday. “You all can speak at the meetings and all but the policy isn’t changing,” he insisted.

With property values falling (though more secure here than across much of the state), tax revenue decreasing as a result, and with costs related to providing quality education climbing (gas and food, for instance), this may be the least opportune time to ask the school board to make changes to policy likely to decrease revenue and increase expenses further. I’m told allowing homeschooled children to participate in public school sports carries with it the possibility of increased insurance premiums for some school districts and also less funding from the state since, somehow, the state reportedly rewards schools financially based on the number of students participating in extracurriculars. But other states and school districts facing the same recession-induced difficulties have valued educational equity and state and student interests highly enough to work through these same economic hurdles, and worse, in cooperation with local homeschool communities.

Some districts pass any increase in premiums on to participating homeschoolers as a sometimes-hefty participation fee, for example. Other states have changed or are seeking to change longstanding outdated methods of financially supporting local schools. Some have found creative ways of getting paid by their state for homeschoolers attending extracurriculars. Others have no doubt learned that increased competition in extracurriculars like music and athletics makes for better bands, better teams and, in the end, potentially more people paying for a seat on Friday night and buying a hotdog at halftime – sacrificing today can pay dividends tomorrow.

Williamson County is said to be the most homeschooled county in Tennessee. I can offer only anecdotal evidence that the vast majority of homeschooling families in our community are not home educating because of a dislike or lack of appreciation for our excellent public school system. For my wife and I, the decision to homeschool was about influence. My occupation takes me away from home so many weekends out of the year that I would have very little influence in my kids’ lives if they attended public school several hours each day, then came home to homework and chores. So for us, and so many of our homeschooling friends, the choice to educate at home is a very practical one and in no way an expression of distrust or disdain for the schools you direct so competently. Together, as allies and not enemies, we can provide our children with the best education possible.

You and I want the same thing. We want to see our children transformed into well-rounded intelligent, creative, respectful, thinking, motivated, selfless, healthy adults who make our communities and our state better by just being there. My son wants to be Troy Polamalu but, nothing against the great safety for the Steelers, I want him to be like Tim Tebow.

Many equal access laws benefitting homeschoolers have been named after this much-respected Heisman winner. As a student Tebow led Nease High School to the state championship and still managed to excel in academics off the field. At home. Because of a Florida state law and the generosity of Tebow’s local school district administrators, he was allowed both a tailor-made education at home and the opportunity to lead others and further develop mentally and physically through public school athletics. Together, parents and coaches transformed Tim Tebow into the well-rounded high achieving adult he is today.

I’d like the same opportunity for my son the athlete someday. And my daughters – the artist and the musician. And for every child in Williamson County.

Thank you for your time and consideration.