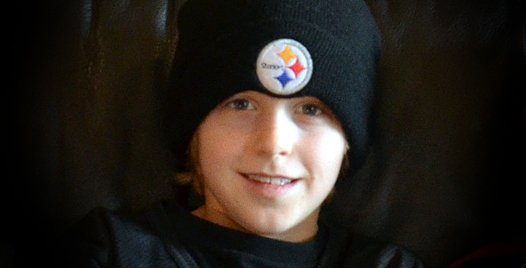 Gresham is eight. His life plan is simple:

“Why don’t you go to Baylor like I did?” I ask just to hear his stock answer again.

“I wanna play for the best.”

My son entered the world with six pack abs and an unstoppable desire to tackle things. He’s happiest when those things are people.

This is genetic – passed down from Becky’s father who, along with his brothers, played for Arkansas when they won some important bowl game whose name I don’t remember.

I’m happiest when Gresham’s happiest so I wrap my dainty piano-playing fingers around a football every afternoon and try not to throw like a girl. I’ve learned the difference between a post route and a button hook, between a corner back and a quarterback.

Last night we had Man Time.

“We’ll eat in bed, burp and fart all we want, scratch our bellies and watch football,” I said.

“Or we can just watch football,” he said.

We shut the door so girls couldn’t come in. We climbed on top of the bed and watched the replay of the Auburn game on my laptop – the game where they won the national championship and became the best.

“I could have caught that pass!” he yelled. “Come on guys!” he pounded his fist into the mattress. “Make it! Make it! Yes!!”

“They’ll be even better when you get there, bud.”

“But Baylor might need me more,” he said. “I’ll just have to see how it goes.”