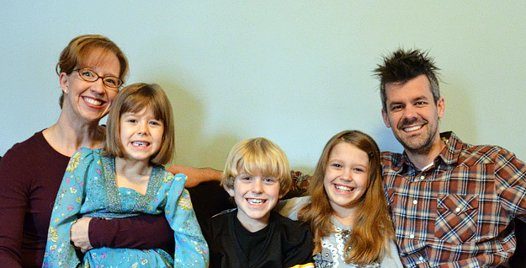 Brian and Amy decided to adopt two children from Ethiopia about two years ago. We celebrated their decision, couldn’t wait to meet our new nephew and niece, but we continued to think of adoption as something radical that only a few super-spiritual wealthy people were capable of and “called” to by God.

Not long after Brian and Amy told us about their decision, Brian and I took a trip to Ethiopia with Compassion. At the end of the week he toured an orphanage, learned a little more about the adoption process from the Ethiopian side of things. I tagged along.

There I was, a person with more than enough, walking through rooms full of beautiful children in need of family. I wondered if I’d made God’s will too complicated.

Could it be, Brian asked, that God’s will is found at the intersection of someone’s need and our ability?

Could it be that simple?

I’ve known the statistics for years. In Ethiopia alone there are an estimated 4.5 million orphans.

I’ve heard all the profound theological reasons people adopt as well. Yes, adoption is an opportunity to participate in God’s provision for orphans. Adoption is a living breathing metaphor for our own adoption by God through Christ too. And on and on.

But none of this budged my will like Brian’s question. …the intersection of someone’s need and my ability?

That simple question flipped a switch in me that no one and nothing else had been able to reach before. I said yes to adoption that day.

But Becky said “no.” And I didn’t push, knowing that Becky is compassionate and generous, prayerful and very discerning. I trusted her and God enough to wait. And pray.

Two years later I came home after a weekend on the road. Becky and I stood in the bathroom getting ready for bed, brushing teeth, talking through what I missed while I was gone.

That morning at church our pastor and friend, Andy, had wrapped up a sermon series called Too Small To Ignore based on the book of the same title – written by Wess Stafford, the president of Compassion International. Because she’s married to me, a speaker guy for Compassion, the information in the series was nothing new. Becky knew what the Bible had to say about poverty, about children, how important little ones are to God’s big plan for the world. She knew the responsibility – the privilege and joy – of caring for the most vulnerable is a treasure given to God’s people – to us. Andy said nothing she didn’t know about God or the Bible but she learned something new about herself.

During Andy’s sermon, about sponsoring children through Compassion, Becky’s mind couldn’t stop thinking about adoption – though Andy never mentioned it. And she said “no.” A lot. And listed the reasons why. And one by one she realized every one of her reasons were self-serving. “They were all about me,” she said.

By the end of that church service she’d said “yes.”

It had been easy for me to to say “yes” to adoption when I thought Becky never would. Easy when I was making money too – but in gig-less December? With an album to fund?

For two years I was the good guy telling God again and again, “You know, if it weren’t for that Becky I’d totally do this.” Becky’s yes suddenly revealed a lot of maybe in me – a lot of my own selfishness.

I like my three kids, the routine, the way the finances work, the amount of space we each have – the comfort and consistency of life together, the five of us. Adopting would mean letting go of all that and opening my life up to who knows what. Everything could and probably will change in ways I can’t totally predict, prevent or prepare for.

We told the kids what we were thinking about doing and told them they could ask any questions they wanted. And we asked them to pray for one week. This is their family too, we told them, and this is a choice that will change our life together forever.

At the end of the week my “maybe” had become an enthusiastic – though still fearful – “yes.” And the kids couldn’t have been more sure. So…

Most of this long process will be kept private. I want to respect my family’s privacy as much as possible but…

I at the very least wanted you to know that we’ve decided to adopt and how we reached that decision because you’re part our life too and we count on you for prayer and encouragement and, well, also I wonder if some of you…

Off to fill out some more paperwork.