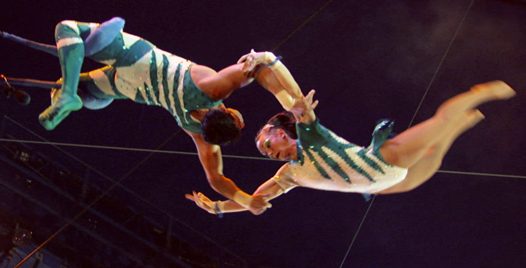 To those who gave and prayed,

Life as an artist has always been, to me, a bit like walking from one precipice to the next on a long tightrope high above the crowd.

Traditionally, in the music business, the crowd was nothing but an audience. They gathered only to cheer if I made it to the other side without falling and breaking my neck.

But in 2005 I started blogging. The distance between the tightrope and crowd shrank. And shrank some more. Eventually I stopped walking the rope altogether and took up the trapeze instead.

The trapeze is more of a together kind of thing. Sometimes I have your wrists in my hands and sometimes you have mine. We fly through the air, doing stuff one guy in tights could never pull off alone.

When I asked you to help fund my next record I did so because I don’t want to go back to the tightrope. Together is better. I’m certain of it. And, apparently, so are you.

With many weeks left on the clock, you raised the $21,000 needed to make the recording. And a little more. And still counting. Every extra cent goes to make the record better and get it out to more people than originally hoped for. Thank you seems inadequate…but thank you.

Many people still prefer the old way of making music. They like their comfortable seat in the stands, cheering only if I make it across alive.

But you aren’t like them. You chose to be more than a member of the on-line audience looking skyward. You climbed the tall ladder with me and gripped the swing. You prayed and gave and spread the word. And together we’ll give the crowd below something to cheer about in 2011.

Thank you for taking my wrists in your hands and holding me up. I couldn’t make this record without you…and I wouldn’t want to.

21 comments on “No More Tightrope”