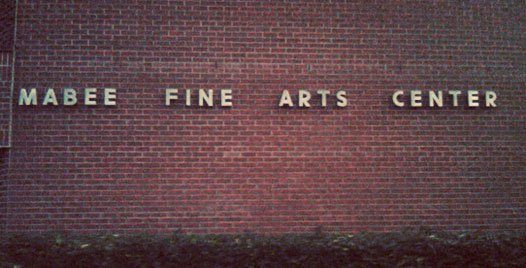 Ben and I are driving across the uglier halves of Arkansas and Tennessee today, taking 40 back to Nashville. Yesterday we were in Arkadelphia, Arkansas to speak on behalf of Compassion International in the morning chapel service at Ouachita Baptist University and play a concert in the evening.

By the way, I may start stipulating in my rider that concerts must end by 9 PM from now on. Last night’s started at 9. Yes, I wear a younger man’s haircut, but I’m still thirty-six: I drive a minivan. I take vitamins. And I’ve developed an allergy to 10 PM.

But, interestingly, part of me has not aged one bit. Nope. Inside me still lives a snickering twelve year-old. He thought these two buildings were funny yesterday…still does.

This first one is right next to the So-So Cafeteria and across the street from the Pretty Good Engineering School. And this building must be for the backsliders on campus. I can’t believe the Baptists are allowing secondary cussing on their signage these days. What’s next? Card playing? Beer drinking? Donald Miller speaking at chapel? I know. It’s not that funny. But inside? He can’t stop laughing. He’s obnoxious. It’s up to the old guy who controls the fingers to stop typing and hit “publish” on this post before…