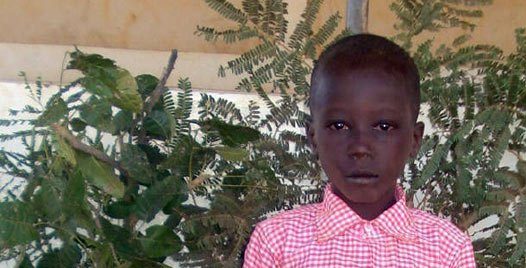 UPDATE: Go here to grab a widget or banner and go here to donate. Thank you!

Two boxes arrive at my house every month full of child sponsorship packets to be laid out on tables at my concerts and speaking engagements. 200 kids waiting for sponsors. Every month.

Occasionally – rarely – I get an e-mail asking me to “pull” a child’s packet. The child has moved to a city where mom and dad have found work. The child is older and has chosen to work instead of going to school. A child has died. I don’t usually know the reason. Whatever the reason, the child is no longer up for sponsorship. Last week I got a phone call from Tasha at Compassion headquarters asking me to pull the packet of a boy named Achile from Burkina Faso in Western Africa. He’s eight, she said, and he has a congenital heart defect that requires him to be transported to India to be operated on by specialists.

He doesn’t need just any sponsor, she said. He needs someone who’ll pray for him, write to encourage him, and understand if things go wrong.

A few days before that phone call, my son Gresham (age 7), got the bad news that his sponsored child in Ethiopia was leaving the Compassion program due to lack of interest from his parents.

“Can my son sponsor Achile?” I asked Tasha.

Tasha said that would great if we’d write and pray for him too.

We’ll do better than that, I said. “We’ll raise the money for his heart surgery on my blog.”

As I type, a page is being created at Compassion.com where more than $24,000 will be donated to cover Achile’s heart surgery. The details of his condition and widget you can spread around the interwebs on his behalf are coming soon.

In the meantime, pray. If all has gone according to plan, Achile is in India right now. No word yet on the exact day and time of his surgery but I’ll keep you posted if I hear anything at all.

What a coincidence that a boy in my garage – 1 of 200 that come and go every month – needed my son.

Not a coincidence at all.