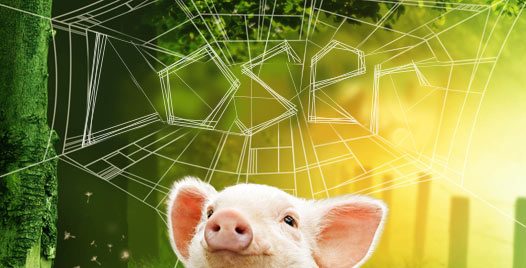 Last night Becky confessed that she really didn’t like Charlotte’s Web at all as a kid – which is downright unAmerican and ungodly if you ask me.

It’s the day before the prizes are handed out at the county fair. Charlotte spots a pig one pen over from Wilber.

“There’s a pig in the next pen, and he’s enormous,” she says. “I think I’ll drop down and have a closer look.”

Then she says to Wilbur’s neighbor, “May I have your name, please?”

Uncle was in fact enormous. And that’s what the contest at the fair was all about. He barely had eye holes his face was so bloated. He was obviously a better beast than Wilbur, the supposedly “terrific radiant” pig I’d been duped into rooting for the entire film.

So Uncle wins first place as expected. And then the film should have ended with Wilbur getting sprinkled on a salad. That would have been justice.

But then, who do the townsfolk make up a prize for?

Who gets to march down the street with a band and everybody in the county singing about his awesomeness?

While the best eats alone in his pen. Like first place doesn’t mean anything.

As a six year-old this chapped me.

I was told just this week, in fact, that my “thirst for justice” is “evidence of God’s working” in my life.

I appreciate the kind words, of course, but I disagree. I was born with a justice complex: Everyone should get what I think they deserve.

The “evidence of God’s working” in my life, the real miracle here, is the too-infrequent sighting of mercy in me: Not giving what I think is deserved.

I’m thirty-six now and finally, sometimes, I can actually be happy for Wilbur.

Though most days I still wish his story ended with a sizzle. And a couple eggs and toast.

21 comments on “The Injustice Of Charlotte’s Web”