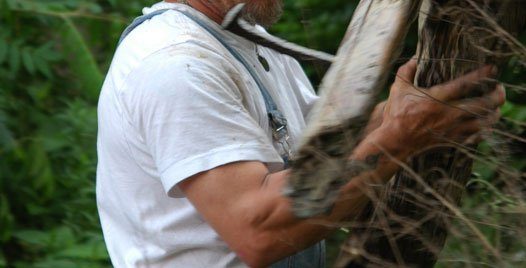 We all have our cross to bear, the saying goes. Papa Smurf made his.

I know something about cross making myself.

And I have a friend back in Texas whose an accomplished cross maker too. Let’s call him “K”. He graduated from a good school, started a successful business, lived in the suburbs with his beautiful wife and three kids. Then, last year he lost it all: the job, marriage, kids.

Because he’s an alcoholic.

He makes a step forward every once in a while: rehab or a new job or a tearful apology. But those are usually followed by a couple steps backward.

He was homeless for a while – living out of his truck and then in a Salvation Army shelter. Today he’s living with another addict he barely knows. But that won’t last. He’ll get kicked out for stealing – again – and craft a lie to cover his mistake.

He lies a lot. Not everyone took the same path to Tent city. Jon is a songwriter who heard “maybe” in every “no” a record label ever told him. He held onto the dream of stardom fifty years too long and lost his wife, house, and mind in the process. Sarge is a Vietnam vet. Tina was abducted and abused for years. And I get the sense that Antonio has no story to tell – just isn’t interested in the American Dream.

But Papa Smurf has the face and smell of an alcoholic.

He made the cross he carries. Not alone. But he had a hand in it.

Last night we gave him some food, socks and water, hugged him and told him we love him but we can’t keep him from lying. To us or himself. There’s no program for that. No proven relief model for that kind of self-made disaster.

I guess then the goal isn’t really to “fix” Papa Smurf but to keep him alive and keep listening in hopes that someday, maybe someday, he’ll put that cross down for good and ask for help. People Loving People will be there when that day arrives. More pictures and stories from the old and new Tent Cities coming. Still processing. And praying K doesn’t end up in a place like this.