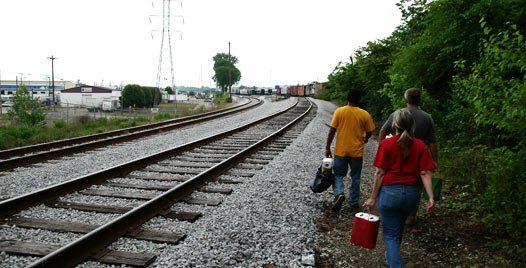 On Tuesday night I drove into the heart of Nashville with some friends who call themselves People Loving People. On the way, I asked them what exactly they do for or with or about the homeless of Tent City.

Friends are like exits for these men and women in Tent City. If they ever decide to get out – get an apartment, go to rehab, check in someplace for counseling – they know they can ask People Loving People for help and get it. For those who’ve asked, People Loving People has furnished apartments, arranged for transportation, doctor visits – you know, stuff friends do for each other.

So these friends of mine took me to see their friends in Tent City.

Our first stop was the old Tent City, home to 150-200 adults under I-24 near the Cumberland River…before the flood. A lot of people lived there so long that they outgrew their tents and built small homes, not unlike what I’ve seen in the third world – made out of whatever scrap wood and plastic they could find.

The old Tent City is uninhabitable today after being under about ten feet of water, diesel fuel from a nearby truck yard, and sewage. There were a few tents left on higher ground, stuffed with belongings in a failed attempt to keep a person’s few possessions dry. The place was a ghost town. Except for Dee Dee and MacGyver – so named because he says he can make anything out of nothing. I shook their hands and introduced myself after the rest of the group had hugged them like family.

MacGyver and Dee Dee have lived in the old Tent City for about five years but moved into a friend’s place after the flood. It’s temporary, MacGyver says. He wants to get a place of their own. Oddly, the flood may make that dream come true. He’s doing demolition work now – a lot of the homeless guys are taking these post-flood day labor jobs for better than minimum wage.

Donna, from People Loving People gave them both socks, a hygiene kit, food for a day and a bottled water. They thanked her and hugged her, radiated gratitude and updated us on where the other residents of Tent City have landed. Most are in a shelter at Divid Lipscomb University.

Then we headed to the new Tent City, which isn’t a city at all yet and I doubt it ever will be.

The homeless guys say the police “harassed” them after the flood and shut down the old Tent City only because the number of people there was so small. Otherwise, they say, the police couldn’t have handled the public outcry of moving 150 people out of an area no one could use for anything else.

They’re right that the land they were on is useless to the rest of us. It backs up to an Inner City MInistry complex that doesn’t mind the neighbors. And it’s not accessible by road or rail so how would the rest of us put it to use or even know it was there?

There are two sides (at least) to every story, of course, so there may have been good reason to move the homeless population to new ground but I can’t think of one on my own.

In fact, the land police have moved the homeless to is far less ideal for everyone. It’s a small heavily wooded swath beside railroad tracks. To make it livable for more than a very few, people would have to knock down trees, which I’m guessing would get them into trouble. And this new land has lots of industrial neighbors who probably won’t like the new residents cluttering up the place. And how long before the railroad company complains of people living too close to the tracks? And it’s just too small. There are only two clearings in the small patch of land and both are full – with only seven people living there so far. We hung out with four of them.

There’s Tucker, who was taking it easy after long day doing demolition work. He lives in a clearing with Papa Smurf, who you met yesterday. Papa Smurf makes and sells crosses and I think he’s doing demolition work right now too.

Skip is so sickly I’d be surprised if he’s able to do anything to make money. But I don’t know. And Antonio cleans the stands at the Nashville Sounds baseball games and takes day labor jobs. Antonio is obviously bright, he’s articulate and, most unusual that night, completely sober. I wanted to hear his story, how a guy like him ends up in a place like this, but he only talked about the present. He was a fountain of information regarding Tent City residents.

He’s optimistic about the future. According to him, the housing authority made a trip to the Lipscomb shelter specifically to offer vouchers to former residents of Tent City. There were only 28 vouchers he thinks, and he didn’t know how long they were good for. But that’s 28 people who won’t be crammed into Nashville’s new Tent City by the tracks.