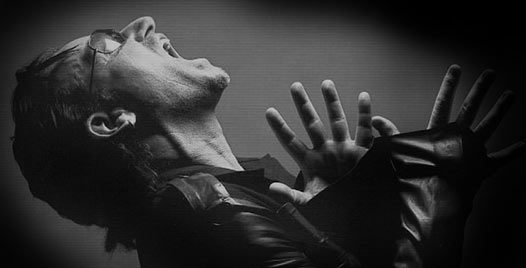 He sat with his eyes closed listening to my two-song demo while I eyed the platinum and gold records on the walls. When the music stopped he pitched – slow and over the plate.

“I want to make you an icon,” he said. “It’s our job to make you famous, your voice, your songs, your face, that haircut.”

Who doesn’t have a needy little passed-over gremlin living in their heart just itching for a little fame?

I didn’t sign with his label, but that didn’t stop the itch.

Since then, I’ve often wondered if fame of any small degree, even if not the aim, undermines the character of Christ in me. Humility, for instance.

Humility buries the individual in Christ and His faceless community.

The Amish see public recognition of any kind as a form of boasting. By accepting it the Amish believe we’re asking for it, asking society for admiration. Dom Helder Camara wrote that “if we get much praise, it is a sign that we are opaque, visible instead of transparent.

Fame is a constant reminder of ourselves.

Humility is unselfconsciousness, forgetting all about ourselves.

One Anabaptist theologian says that the number of mirrors in a society indicates that culture’s attachment to self. No surprise that in many Mennonite communities there are few, if any, mirrors. Madeleine L’Engle wrote: “Humility is the act of throwing oneself away in complete concentration on something or someone else.”

Fame is the result of comparison, being prettier, wealthier, more talented, smarter.

Humility is refusing the comparison to others, being indifferent or oblivious to how we stack up.

C.S. Lewis argued that when competition is removed all that remains is a humble assessment of great and small abilities.

Fame is often strived for, worked at, plotted for and once achieved, a struggle to maintain and defend.

One theologian says that “Christian humility is the voluntary letting go of coercive power in a way that reflects the very character of God.”

Fame moves others to serve us.

Humility moves us to serve others.

James warned us about partiality. When we’re partial to a person over another because of their status, he asks, “Have you not become judges with evil thoughts?” (James 2:4)

I’ve tried to combat the appearance of fame-induced pride by doing the things I think will prove to you I’m humble: mocking myself, pointing out my mistakes when my successes are praised, for instance, but…

Humility claimed is pride renamed. Working so hard to make sure you know I’m humble, well, that comes from thinking about myself and caring an awful lot about what you think of me.

I spent the weekend singing in front of thousands of people at a festival – something I haven’t done in a few years. At times it was intoxicating. To hear thousands of people singing my songs back to me, applauding me, asking for my scribble on a scrap of paper or the back of their t-shirt. It made me want more. It made me want to buy some sunglasses and wear them indoors.

And now I know the gremlin with the itch is still in there.