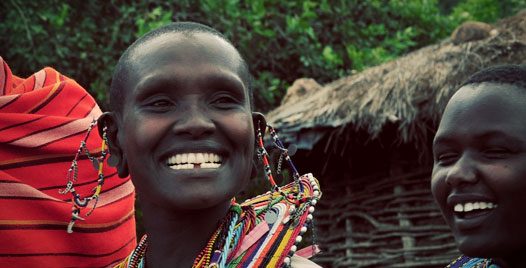 This is Jonathan. Or at least that’s what he asked us Americans to call him. Jonathan’s a Maasai, and lives mostly as his people have for hundreds of years in Kenya.

He eats only beef, blood and milk, for instance. The entire tribe has been on the Atkins diet for ages. They’re long and lean for it.

When Jonathan was thirteen he was circumcised the way his father and his father’s father were: Publicly “by the oldest elder with shaky hands and a sharp knife.” Because Jonathan passed into manhood through this grizzly ritual without flinching or crying, he was rewarded with a cow and the full rights of a Maasai man.

One of those rights is marriage. Jonathan has five wives, I think. They’re beautiful. Every one of them. And they’re smiling. Despite their hard lives.

Maasai men used to busy themselves with hunting and fending off attacks from rival tribes but today Jonathan and his buddies don’t do much. The boys shepherd, the men sit around drinking fermented milk, and the women do all the work.

They build the fence around the village, slaughter the animals, cook the food, have the babies, raise the children, clean and build the homes out of mud and manure.

All this work. And yet these women looked so happy. Or at least their faces did.

But then I saw their homes.

I’m six feet two inches tall and Jonathan was almost a head taller than me. No man in the village was shorter than me but I had to stoop to enter their homes. Why are all the doorways so small and ceilings so low?

Hundreds of years ago, we were told, Maasai women thought it would be a good idea to lower the roof so that Maasai men would be forced to bow and honor their wives.

When we’re angry we can go nuclear: throw fists and words in rage. No one likes an abuser throwing a temper tantrum, though. Public opinion is pretty unanimous on that. So very few of us choose to be one. Why risk being criticized or locked up when you can just, well, lower the roof?

So I lock myself in my office and work longer hours than I really need to – let’s see how she likes that. The silent treatment works pretty well too. It’s a gamble though. She could always counter with a month straight of bedtime “headaches” I guess.

Unforgiveness has many faces. And sometimes it even smiles.

17 comments on “Raise The Roof”