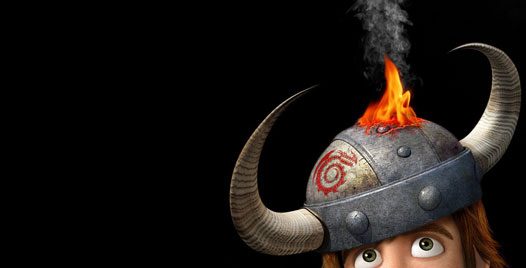 Spoiler Alert: Don’t read this post until after you’ve seen How To Train Your Dragon.

In How To Train Your Dragon, Hiccup is the son of a Viking leader who is at constant battle with a slew of dragons. Every adult in their village fights the sheep stealing beasts and every child dreams of taking up his sword against them someday.

This is how bravery has been defined for generations of Hiccup’s people. But he does two things that are even braver.

As he raises his knife to kill his first dragon and make dad proud, he dares to look into the eyes of his victim. Much later in the film he explains that he chose not to kill because he saw himself in his enemy: fear, duty, weakness, courage, life.

Hiccup’s first great act of bravery was identifying with and valuing his enemy enough to serve: He chose to meet his foe’s basic “human” needs.

If your enemy is hungry, feed him; if he is thirsty, give him something to drink. -Romans 12:20

Once Hiccup is able to think of his opponent as “human”, he’s able to not only empathize with and serve him but also to understand why his enemy behaves the way he does. He steps into the other guy’s claws long enough to discover the reason for his bad behavior.

There’s a good reason the dragons steal sheep. They’re propelled by fear and Hiccup decides to kill that fear instead of his nemesis.

So, Hiccup’s second brave choice was to understand his enemy and get to the root cause of the conflict with him.

Pacifism isn’t passive. And it’s not for cowards and weaklings.

True, with biceps the size of toothpicks, Hiccup would never have been a great warrior. But raising the value of a dragon’s life to the same level as his own took more strength than raising his father’s sword.

And also, my inner seven year-old would like to mention that the two-headed dragons burping fire were pretty stinkin’ awesome. And the kissing parts were icky.

10 comments on “How To Train Your Dragon & A Pacifist”