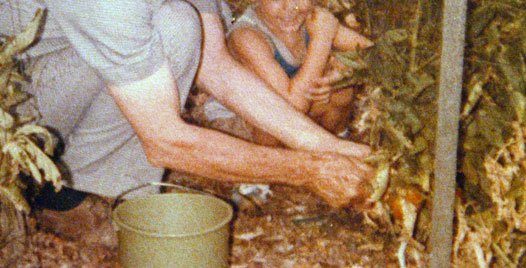 Grandaddy was a Southern Baptist until he tried to start a co-ed Sunday school class. The church wouldn’t allow it so he took his bible and his family across the street to the Presbyterians where he served as a teacher and elder for decades afterward.

As tall and thin and talkative as he was stubborn, Grandaddy walked the rows of his garden with me every Summer telling me stories about fights he got in as a kid at school and as a teacher at church, squirrels he killed for stealing pecans from his trees, and the stuff my dad did when he was my age. We’d squat between the rows of tomatoes and green beans, let our skin relax in the shade and work the vines. His hands were massive, speckled and shiny. They moved as if independent creatures, skittering across the green, pulling and tossing a dozen beans in the time it took me to pry one loose.

“…and then your daddy and John Carwin tied your Aunt Joy to a tree down there by the creek and tried to light her on fire like Indians.”

Those were my favorite stories: The ones that turned the soldier-made-real-estate-agent who mowed the yard and read newspapers into a real live boy like me.

And Grandaddy talked a lot about the weather too. He was like some sort of Magic Eight Ball when it came to precipitation and temperature. He lived past ninety. Near the end he left his creek and pond and acres of cucumbers, tomatoes, green beans and squash to spend his last years watching Bonanza with my grandmother in a nursing home where the smell of vegetables ripening on the vine was replaced with the scents of urine and 409.

All that wisdom, all those words, those walking shoes, locked inside with nothing and no one to tend.

I miss him somedays and wish I had let him tend me a little more often. I smelled Grandaddy yesterday afternoon while I was pressing seeds into the dirt. I heard him come out of me when my son asked if I thought it would rain and then how I learned to grow things.

“…and then Grandaddy and Aunt Lindy and I would sit on his back porch and shell green beans for hours.”

Mine is a small garden. Puny compared to Grandaddy’s. But we don’t need a lot of space, Gresham and I. Just enough to kneel down on together. 33 comments on “Between The Rows”