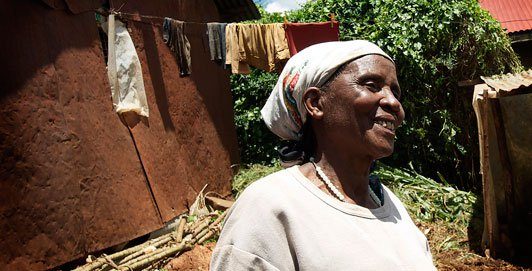 We walked for a mile or so from the Compassion project on jagged roads made of red clay. Down a steep hill to a small metal home. She told us her story: Her oldest daughters skipped town and left grandmother with five grandkids and one daughter of her own to raise.

One day she enrolled her two youngest grandchildren into Compassion International’s sponsorship program. A great day not just for two but for seven.

As social workers, board members and pastors from the Compassion project got to know grandmother and her kids, they slowly uncovered the depth of the family’s poverty. No beds. Almost no food. Battling the physical and mental effects of malnutrition. No ability to make ends meet and no hope of breaking free of poverty’s grasp anytime soon.

When Compassion sponsors met the needs of two grandchildren they lightened grandmother’s load tremendously but it wasn’t enough. What else could be done for her?

Compassion could write grandmother a check every month, or drop food off at her house daily, but that would create dependency. That kind of help hurts.

So the Compassion project staff instead wrote up a grant proposal, essentially – a proposal asking Compassion headquarters in the US to release funds above and beyond a sponsor’s $38 each month: Money that would help grandmother help herself and her entire family.

The money was not handed to grandmother but was used by local Compassion staff to buy her a cow. Unbeknownst to Compassion or grandmother at the time, the cow was pregnant. Two for the price of one! “A miracle,” she said. Today grandmother has three cows producing milk for her family and plenty to sell to neighbors too. With the money from milk sales grandmother bought a cart and a donkey so she can carry hay, milk and logs – cutting this sixty year-old’s workload dramatically. And with a consistent income now she can feed her own family and that independence has put the biggest smile on her face. Think of sponsoring a child like building a bridge. On one end is you and Compassion. On the other is a child in need of education, food, clothing, healthcare, play and hope. But when that child’s family is “highly vulnerable“, that bridge allows Compassion’s care and your letters of encouragement to pour into the whole home.

Sponsorship is a bridge. And sometimes, across that bridge, walks a couple cows, a donkey and a miracle.

Thanks to Brad Ruggles and Ryan Detzel for the great pics of our visit to grandmother’s house.

16 comments on “A Bridge For Cows & Miracles”