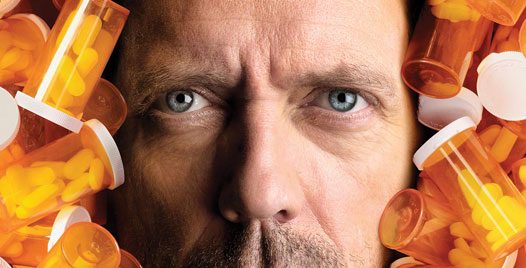 I don’t have cable so I’m generally usually blissfully unaware of what awesomeness I’m missing while the rest of the planet is frontal lobe deep in Lost or 24 or whatever variety of smack is being peddled this season. And by “the rest of the planet” I’m obviously referring to Boo Mama, Big Mama, and my many more mama friends who blog and tweet and Facebook regularly about their love of cable programming and tempt me toward a $60 month contribution to Comcast. I have not tasted these addictive morsels of broadcast television…however.

One vulnerable night in a hotel room last Spring I happened to land on a rerun of House. Now, every Tuesday night I scurry over to Hulu.com to score a free episode. I am slightly obsessed (and proving you don’t need cable).

Because I’m a total pharisee I have to justify this hypocrisy, this addiction – and I’m quite skilled at the art of justification so this is no problem. Not at all.

You see, House is a philosophical – nay, a theological discourse disguised as a run-of-the-mill vapid medical drama. It makes me smarter, better, unlike the crap you watch. (Pride and arrogance, by the way, are not problems I deal with on a moment by moment basis. Nossir. I’m the most humble person you know.)

For instance. (The following is an instance of House making me better, not of my humility. In case you were confused. It happens. The confusion, not the humility.)

A dwarf came into House’s hospital doing the usual stuff patients do as soon as they’re under House’s “care”: coughing up blood, bleeding out the ears, getting defibrillated repeatedly, etc. As usual House and his team couldn’t figure out why the little lady was dying. Until House saw an x-ray of her leg bones. He got that “aha” look in his eyes and a member of his team said something like, “What? Her x-ray is normal.”

A dwarf’s bones aren’t supposed to be like everybody else’s. That’s an essential part of being a dwarf: being different deep down in your bones.

Turns out she wasn’t a dwarf at all. She looked like a dwarf only on the outside. She thought she was a dwarf through and through. But she actually had a busted pituitary and a little surgery and a couple pills made her right as rain again…and a lot taller.

If I say I’m something different from normal then I’d better not be normal deep down in my bones. I better be quite different – all the way through. Or else I’m not what I think I am.

38 comments on “A Post In Which I Write About A TV Show. (And Then The Apocalypse)”