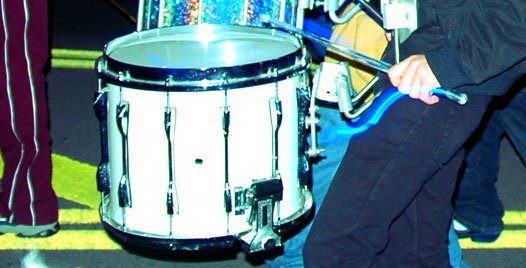 There is a hill where the old men sit
and watch the parade go by,
every September’s third Saturday,
before the game is played that night.
They watch as the children, they dance,
the King and the Queen holding hands.
They cover their hearts as the Stripes and the Stars
lead the way for the High School Band. There’s Stanley the butcher, who closed his shop
cause of the Kroger across town.
His wife, MaryAnn, the librarian
who was selling Avon now.
They lost their oldest to Vietnam,
their youngest to go play drums,
and their Katie she stayed, and she gave them their Amy,
who was marching in the High School Band. And the trumpets sing,
and the cymbals ring.
It’s good to hear young ones playing the old songs,
marching in the High School Band. Frank used to pastor the Baptist Church
before they tried to run him out.
He said, “Jesus, the righteous one, threw no stones,”
so he wasn’t starting now.
When that trailer girl first showed up
he said she needed a little love,
and he’d hold her black baby, and pray for him daily,
now he’s marching in the High School Band. And Michael Brown, who came to town in 1981
to teach at the college his second wife, Margaret, attended before they split up.
Now he’s on number four, and he’s tired and sore,
and figures their time has passed,
but it’s a beautiful day, and he can get away
when he’s listening to the High School Band.
And the trumpets sing,
and the cymbals ring.
It’s good to hear young ones playing the old songs,
marching in the High School Band.