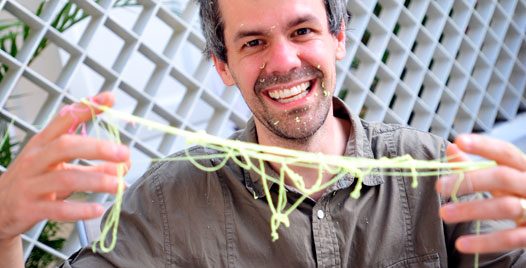 In the first year of our relationship Yanci asked me in a letter to pray for her Dad because he needed help. What kind of help? I thought. Is he OK? Is there something more I can do than pray?

On the bus last week I asked Yanci’s mom what that prayer request was all about. “I’ve been praying for him for four years now and I don’t why. I don’t know if God’s already answered my prayers.”

Her face broke into a huge grin as she told me the story through a translator.

Then, one day, a neighbor told Yanci’s mom about the Compassion project run out of her church and told her to sign up Yanci and her sister Pamela. She did. For two years Yanci was enrolled in the Compassion program at the church – but without a sponsor. Some time in those two years Yanci, Pamela and their mom began attending church services there too – with their neighbor. They became Christians. But Yanci’s Dad wanted nothing to do with church or God.

Then I became Yanci’s sponsor. We started writing letters back and forth and Yanci asked me to pray for her dad.

Yanci’s neighbor was a pest. She kept telling Yanci’s dad that God could help him. Eventually, just to make her shut up, he went to her church. He went drunk. He went drunk the next time too. And the next. That’s when God answered our prayers. Somehow, through the fog of alcohol, God spoke to him. One Sunday Yanci’s dad gave his life – and his addiction – to God, and he never drank again.

The translator asked Yanci how her dad is different now that he’s a Christian. “He pays attention to me,” she said. “He hugs me-” She leaned into my side, buried her face in her hands and sobbed, unable to say anymore.

At the end of the day, Yanci, her Mom and her sister, went back to our hotel to open presents from my family. Her dad, a taxi driver, was coming to pick his family up and to meet me. While we waited a silly string fight broke out somehow. Ok, I started it. Then her dad arrived. It was easy to imagine how frightening such a large man could be to a little girl. But it was impossible to imagine this large man being anything other than kind. He was joyful, proud of his girls, humbled by the patience and love of his wife, thankful for our prayers, boasting on the power of God to change his life. “People heard that I became Christian and said it wouldn’t last. They said it would be six months. But here I am,” he smiled. He told me the gangs ask him to pay them every month in order to live safely in “their” neighborhood. They say they’ll kill him, but he still refuses to cooperate. They get enough of his money at work already: 20% of his income goes to the gangs that protect the taxi company he works for. He told me that his neighborhood is dangerous – people are shot there all the time. “People have been murdered at my front door.”

We stood together by the pool and prayed – all of us holding each other – believing that God answers prayers. We thanked Him for Yanci, for saving her father. We asked Him for protection and strength. Then I said good-bye to my family in El Salvador. 89 comments on “Praying For My Family”