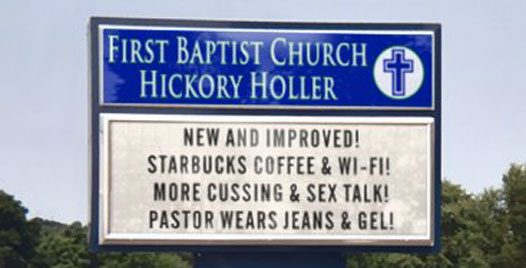 I like the folks at Catalyst, the church leadership org hosting a conference this week in Atlanta. I did an event with them in California not long ago, I read their blog, I’m impressed by their generous support of Compassion International. I like Catalyst. But Catalyst is missing something. All the major church leadership type conferences are. They’re missing Andy.

Andy is my pastor. There are a lot of Andys

Andy is not cool: He’s not even slightly metrosexual. To Andy, Diesel is an engine not a pair of jeans. He has never worn a faux-hawk. He has never and would never wear a man purse. He doesn’t listen to Wilco or Pedro The Lion. He drives a truck, not a Hummer. His phone is a silver brick running Windows.

Andy is not tech-savvy: He does not Twitter, Youtube, Vimeo, podcast, blog, multicast, live stream, or vlog.

Andy is not famous: He doesn’t have a book deal. He doesn’t know Donald Miller. He doesn’t do speaking tours with gigantic whiteboards. (Which is also cool.) This year he won’t be on stage at Willow Creek, or Story, or Catalyst or…

The cool, tech-savvy, famous pastors will. And that’s good. But is it great for Andy?

It’s not just church size Andy doesn’t have in common with these guys. The speaker guys aren’t pastoring a church in semi-rural Tennessee in 2009 during a recession, meeting in a school cafeteria, without video producers, service producers, teaching pastors, sermon writers, a six figure income, a multi-million dollar budget, multiple campuses, and maybe even a helicopter.

With so little in common, how much of what these speakers have to say can Andy really put into practice in his not-cool-not-tech-savvy-not-famous life pastoring a very different kind of church? I don’t know. But here are a few reasonable wants up for discussion:

Catalyst and all the other leadership conferences hosting big-name speakers are doing good work. No doubt. But is it great for Andy?

How can he learn from and be inspired by other pastors ministering in a town and church like his, to people like his neighbors?

How and when do the guys doing all the teaching right now learn from everyone else?

These are questions I know the folks at Catalyst are asking. Have you got answers?

60 comments on “Is Catalyst Great For Andy?”