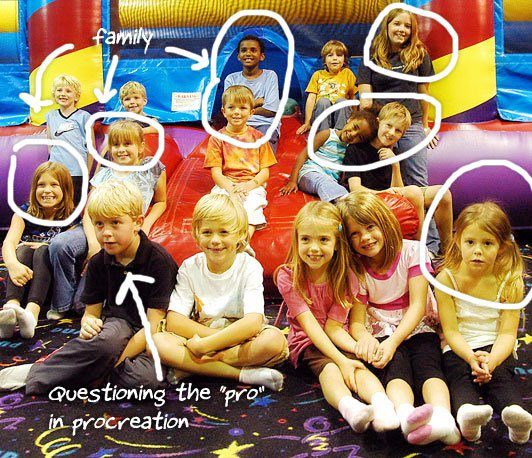 Birthday Trade-Off #1
Every guest added to a home party costs me pennies. Every guest at Pump It Up costs me a kidney.

“I can only have six people at my party?” he asked in his best imitation of a sixteen year-old.

“No,” I explained. “You can have fourteen kids at your party. You’ll be related to nine of them.” Birthday Trade-Off #2
Having a Dad who’s a tightwad has its costs and benefits. On the one hand he doesn’t have to work as much as he would with credit card debt and a big mortgage payment. On the other hand, he’s too cheap to buy a cake and he has six hours in the middle of the week to do it himself.

This has its up and down sides as well. The up? You can ask for any cake you want and he’ll try to make it for you – he’s got the time. The down? While watching Dad struggle to make straight lines out of squirt-can icing, you may learn new words you’re not allowed to say at church or around grandparents and social workers. Birthday Trade-Off #3
That much fondant and frosting plus pizza plus jumping can and will and did induce vomiting in the smallest party-goer. Or is this phase one of Gresham’s scheme to make room for one more friend at next year’s party?