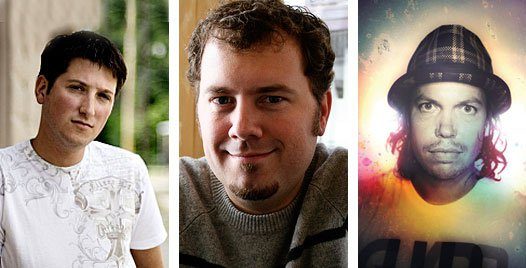 I have three talented guys to thank for building my new home on the web – and for putting up with my perfectionistic, um, tendencies.

I’ve been a fan of Brad’s designs and blog for a while now.  We seem to have similar taste so I asked him to get involved.  I asked him for a lot: color, texture, paper, organic, lots of places for images, lots of flexibility in the sidebars, different from all other artist sites, a hybrid between blogger and musician. In fact, specifically, I wanted a site that didn’t look like it belonged to a musician who decided to try out blogging.  I wanted a site that looked like it belonged to a serious, been-doing-this-for-years-and-won’t-be-quitting-anytime-soon blogger…who also makes music.  And I wanted a place where funny and dark posts could live side by side. Brad gave me everything I asked for.

I didn’t want the top few inches of my site (called a header) to be a billboard for my face.  Bore-ing. I wanted something illustrated and artsy.  Brad tried out a few ideas, and they were good, really good, but neither of us loved them. So I asked Barton Damer, who’s illustrated for Catalyst, Nike, Lil’ Wayne and other big dogs, if he’d like to get involved. I was shocked that he said yes.

He shot me a mock-up with deer in it. Yes, deer.  I’m paraphrasing but he asked, “Something like this maybe, but without the deer?”  And because he’s Barton Damer, I said “Um, sure…without the deer though. Right?  No deer?” And we had a good talk about how I’m trying to connect the first world to the third world as often as I can in as many ways as I can. He got that.  He’s doing the same thing. That’s how the weird but cool deer illustration was reborn as water flowing between a rural Africa and an urban America. Perfect visual metaphor.

On top of handling all my booking, road management and running sound for me, Ben also coded this entire site. One of the things that makes Ben great at whatever he does is that what’s best wins out over what’s easiest. For this site that meant hacking WordPress again and again to make it do what we wanted.

And he’s still at it.

The Tour page of this site, for instance, is pretty basic right now.  But when Ben’s through it’ll do things no other artist tour page (we’re aware of) does.  Seemingly simple stuff “fans” told me here and on Twitter they wish a site could do. Ben’s working to make it happen for you guys.

While we’re on the subject of other artist sites, Ben and I looked at a lot of them, especially the ones built using WordPress.  We noticed that most of them use the same template for every page – because that’s the easiest way to build with WordPress, we suppose. The same stuff is in the sidebar of every single page. But Ben made every page of this site different, because we figure  you don’t visit the Media page hoping to see tour dates, and you don’t go to the Store page wanting to see videos, and when you’re watching videos you’re not hankerin’ for a music player. Because of Ben’s coding skillz you don’t have to wade through a bunch of stuff you’re not looking for, and hopefully the stuff you are looking for is right where you expect it to be.  Because of Ben, every page does only what you and I want it to do. And that took a lot of skill and problem solving.

This is the B Team who built this site for you. Thank you Brad, Barton and Ben for your patience, persistence and creativity. Thank you.