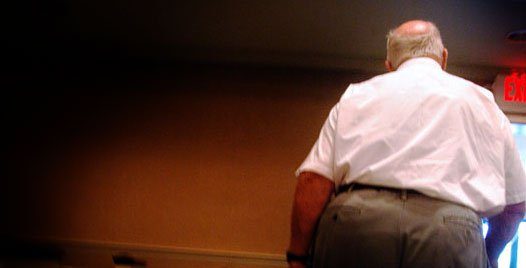 This past weekend I played and spoke at First Baptist Bridge City; a key player in my family’s history: It’s where my mom grew up, where we said good-bye to my grandmother, where Mr. Johansen introduced my parents to each other, where they tied the knot.

More than 45 years ago my Dad drove from Texas A&M to First Baptist in Bridge City to see the cute redhead his buddy from college wanted to fix him up with.  Dad sat in the balcony where he could get a look at her without her getting a look at him. After that church service he asked Mr. Johansen to introduce him. My brief time with Mr. Johansen on Sunday reminded me of something Dr. Harvey taught me years ago. Dr. Harvey was the token senior citizen and I was the token Gen-Xer on the worship planning team of a mega-church in the Nashville area. I was twenty-five, my mouth constantly in motion, incessantly pushing week after week for louder, bigger, more contemporary, “relevant.” He was in his seventies and sat through most meetings with a slight grin on his face, silently watching the tug-o-war of ideas. Until one day.

Someone read aloud a comment card written the previous Sunday. We relished this moment at the beginning of our meetings, the moment when we could hoist our persecutors up as evidence that we were doing the Lord’s work the Lord’s way. As soon as the card’s complaints left his lips another minister began criticizing the person who wrote them, calling her “stuck” or “out of touch” or “selfish” – we used all those words pretty regularly to describe all who didn’t agree with us so it’s hard to recall exactly which ones were used that day.

What I do recall are Dr. Harvey’s words to us. He picked up the card, read the name on it, and told us about her life. With all the patience of a veteran parent he asked us to imagine living in a world we once built but don’t fully understand anymore: with technology our kids gave us but we don’t know how to operate, grandchildren speaking a strange language, phone buttons we can’t see anymore, waking up in an aging aching body, independence giving way to dependence a little more every day, burying a spouse, then a friend, then another, and another, and another…

“Everything around her is changing,” he said. Nothing of her youth remained. That world was gone. Her church was the one place she hoped would never change on her and I was fighting to change it no matter what.

She wasn’t stuck, or out of touch or selfish. She was scared.

But not to me. My brand of “relevance” was for the young and by the young. And she wasn’t anymore. My mom is a worshipful listener with a great deal of empathy. She stood there with swollen pink eyes and listened to Mr. Johansen, her former Sunday school teacher, tell of burying close friends recently. “I’m the last one left,” he chuckled. And then he cried.

My dad put his arm on one shoulder. My mom rubbed the other. I wished I could be twenty-five again.